Six Kentucky community banks that could be competing for business have agreed to work together as charter members of the specialty $150 million Commonwealth Infrastructure Fund to finance public-private partnerships (P3) in Kentucky.

In the next few months, CIF is expected to reveal one or more inaugural deals.

“We are looking at five to 10 potential projects that should start sometime in 2018. We expect to make loans to two or three projects in 2018 after the underwriting process has been completed,” said John Farris, who manages CIF. “We believe we will lend out all $150 million over three to five years – $30-$50 million a year.”

One development team already has a tentative green light for a P3 project it is pursuing through a local government request-for-proposal process.

“The development team’s response to the RFP contemplates using the CIF for construction financing,” Farris said. “The loan will be made by CIF only if this development team is awarded the P3 project by the local government.”

CIF also could mean better use of assets for private banks and better roads, bridges, buildings and more for public taxpayers. It’s been harder for banks to qualify borrowers and put their assets to work since 2010’s Dodd-Frank Act, and demand for public infrastructure outstrips the commonwealth’s supply of public dollars.

CIF believes it is the only fund of its type created specifically to handle public-private partnerships. Each of the six member banks committed $25 million to the partnership, creating a lending pool of $150 million.

“The organization was set up so the smaller banks could participate … because the projects are potentially of such a size and scope that they would be too big for the community banks,” said Farris, who is also president and managing partner of Commonwealth Economics, an economic consulting firm in Lexington that works with public and private clients.

“They (the banks) know these projects and they know the areas, so they want to have an opportunity to participate in the financing,” he said. “That was the primary reason to pool resources: so that if there was a project in the $20-$50 million range, combined, the six banks could lend to these projects and feel good about their ability to be competitive as a lender.”

“By coming together (as CIF) we can address some of the needs that are beyond the capacity of any one individual community bank. Otherwise they go to very large out-of-state financial institutions,” said Lloyd Hillard, president and CEO of United Bank & Capital in Frankfort, one of the
CIF partners.

“If we have a $30 million project, for example, each bank participates up to $5 million, so that means one bank doesn’t have to go (and assume all the risk for) the $30 million. Each bank has to make its own credit decision, so (participation is) going to vary from project to project.”

For decades, public agencies have paid for roads, sewer systems and airport improvements by either raising taxes or issuing bonds. But such bonds often are issued for 25 or 30 years, a period of time that isn’t appealing for banks that have to answer to regulators and shareholders annually or quarterly.

Both Hillard and Dan Mason, chief lending officer for Traditional Bank, said CIF might become a source of bridge funding that gets projects started, completed and stabilized before the banks then make a timely exit.

“The length of the projects will vary. There are other kinds of long-term financing that might be more attractive” for borrowers later on, Hillard said. “For example, insurance companies – large insurance companies – invest in stabilized projects based on cash flow, and they offer very long-range, fixed-rate (financing) in many cases that is much better than what banks can offer… Thus, the banks could go on to other projects.

Mason agreed that the CIF banks likely won’t have to commit their money for decades.

“It’s a possibility; that happens regularly out in the world. If the return’s right, then maybe somebody (another financer) is willing to pay a little bit more than the book value to get that stream of cash flow,” Mason said.

“You’ve just got to get things in place so when something comes along you can be prepared to react,” Hillard said.

Part of a shift toward P3 deals

Historically, public agencies built a road or parking garage or bought computer services for an office from private firms by contract, spending public dollars in their treasuries to do so. As political sentiment has changed and budgets tightened, public officials increasingly have declined to raise taxes, issue bonds or increase fees to pay for projects. Public-private partnerships that perform projects without committing taxpayer dollars are becoming a preferred approach.

The state’s Finance and Administration Cabinet has a fairly simple definition of these partnerships: “A long-term contract between a private party and a government entity, for providing a public asset or service, in which the private party bears significant risk and management responsibility, and remuneration is linked to performance.”

The Kentucky Chamber, the Kentucky League of Cities and the Kentucky Association of Counties all had input in shaping a P3 legislation update in 2016, which they support as a valuable tool “to address critical infrastructure problems.”

However, the chamber also advises P3 is not a “silver bullet” that will solve all the state’s infrastructure funding problems. P3s are not immune to risk.

The state’s most ambitious P3 project, KentuckyWired – which will create a gigabit-speed internet network with nodes in all 120 counties – is over budget and behind schedule. Initially expected in 2016, completion of a first phase in Eastern Kentucky is now slated for late 2018. In December, Moody’s Investor Service downgraded some $300 million in bonds issued for the project from “stable” to “negative” because of delays and cost overruns.

In Indiana, privatization of the Indiana Toll Road, a $3.8 billion P3 project in 2006, wound up in bankruptcy early this decade when truck traffic on the Chicago-to-Ohio artery was only half that needed to repay its bonds.

On the other hand, the $2.3 billion Ohio River Bridges Project, a joint Kentucky-Indiana P3 deal, came in on time and under budget, and is generating higher than projected toll revenue, according to bondbuyer.com.

Farris, Hillard and William M. Alverson, CEO of Traditional Bank in Mt. Sterling, all point out that the institutions have legal lending limits enforced by bank regulators that cap how much they can invest in any one project. Limits are determined by a formula that weighs a bank’s assets and the level of risk.

Besides outside regulatory lending limits, the banks also have internal policies that govern how bank funds are invested.

Farris points to the ongoing dorm construction at the University of Kentucky by Memphis-based EdR, a real estate investment trust, as a good example of how public-private partnerships have worked in Kentucky. EdR financed all $450 million of its five-phase, on-campus student housing development.

Staying with what you do best

“Whatever the policy objective is, you start with that first. Then you say, ‘Is this something that the private sector might be able to use their expertise in?’” Farris said. “UK is great at educating students, but they realize there might be companies out there that are a lot better suited to building and operating dorms. So you look to a private partner and say, ‘What are the advantages?’ And oftentimes they can do it quicker and more efficiently because they’re used to doing it every day.”

About 30 miles south of UK’s Lexington campus, the Madison County Fiscal Court is debating whether to move ahead with a project called The Healing Center that would provide care for people battling substance abuse.

If the county approves the project, a key question is whether it would be a traditional build-to-suit project in which the contractor is paid to build the facility or be built through a P3, said Madison County Deputy Judge-Executive Colleen Chaney.

Madison County received three bids in January for $8-$10 million, Chaney said. All three bidders said they would do the project on a build-to-suit basis, with Brett Construction of Lexington, working with the Walton Co., also offering a P3 option.

The build-to-suit approach is a short-term relationship that ends upon acceptance of the facility, with the county responsible for financing. A P3 plan for The Healing Center would involve an ongoing relationship of 20 years or more because the contractor would be responsible for financing construction and maintaining the building while Madison County leases it, she said.

Meanwhile, 10 companies say they would work with Madison County to manage the center and provide the desired programming on a P3 basis.

“With The Healing Center, I think it’s (P3) the right way to go on this project,” said Madison County Judge-Executive Reagan Taylor. “Government in general doesn’t have the expertise to do recovery and healing, so it’s good to use a P3 and experts and partner with them to do what they do best.”

The P3-expanding legislation enacted by the General Assembly and signed by Gov. Matt Bevin in 2016 also provided an impetus to create the CIF.

Over the preceding years, a long list of P3 projects were completed in Kentucky, and most other states have adopted legislation that allows for public-private partnerships.

“The best thing about the law is the ability to do unsolicited proposals,” he said. “The new law codifies the process for the private sector to bring the public sector money-saving ideas.”

The 2016 law spells out a precise procedure by which a private party may present a P3 proposal to a public agency.

“In the past if you did that, you may have been precluded from (subsequently) bidding on that because you had had that contact with officials. … This changes the landscape and says, ‘Bring us your good ideas,’ ” Farris said.

Mike Burnside of the Kentucky Finance and Administration Cabinet said the new structure clears the way for the commonwealth to solicit P3 proposals or “have an unsolicited P3s where a developer comes in and approaches the commonwealth and says, ‘I’ve got a great idea. I would like to put a hotel or a recreational area or a water park or whatever on your property at this location. I will provide all of the funding up front and operate it, and we’ll do a revenue-sharing type thing over the years.’”

Such an agreement alleviates dependence on state bonds to pay for a project, said Burnside, who is commissioner for facilities and support services in the cabinet.

The banks signed on to participate in CIF are some of the largest state-chartered institutions in Kentucky (ranked by assets).

Although each of the banks has pledged at least $25 million for the partnership, they’re not obligated to participate in all projects, according to Farris and the CIF banks’ executives.

Regarding sitting down at the table with some of his competitors when CIF members gather to talk business, Mason, Traditional Bank’s representative, said things have progressed smoothly.

“So far there’s been good open communication, and we’re all working toward a common goal,” said Mason, who acknowledged that competition for business has been discussed. “We talked about that early on – putting the interest of the commonwealth (Kentucky) at the fore. So far, in the early phase, it’s gone well.” 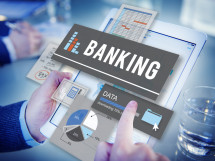 Banking Outlook: Bankers Like the Prospects They See for 2018