FRANKFORT, Ky. —  MAB Fabrication Inc., which manufacturers awnings and steel structures for greenhouses, garden centers and big-box stores, will locate a new production operation in Walton, creating 24 full-time jobs for Kentucky residents in the coming months with a $6.9 million investment.

MAB leaders plan to locate in an existing 165,000-s.f. facility on Beaver Road in Walton. The project comes with MAB’s continued growth as the company looks to increase its manufacturing footprint and better serve customers throughout the U.S.

Founded in 2014 and headquartered in Harrison, Ohio, MAB is a custom steel fabricator that manufactures awnings for greenhouses, garden centers and big-box stores, among other establishments.

MAB Fabrication’s investment and planned job creation continue a recent wave of economic momentum in the commonwealth as the state builds back stronger following the effects of the pandemic.

To encourage the investment and job growth in the community, the Kentucky Economic Development Finance Authority (KEDFA) in May preliminarily approved a 10-year incentive agreement with the company under the Kentucky Business Investment program. The performance-based agreement can provide up to $250,000 in tax incentives based on the company’s investment of $6.9 million and annual targets of:

A detailed community profile for Boone County can be viewed here. 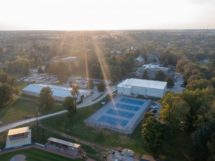 Nalley named Kentuckiana AHA 2021 Woman of Impact
What is NIL and how might it fundamentally change NCAA sports?