The proposed redistricting maps for the state Senate and Kentucky Congressional districts were introduced in bill form and passed by the Senate State and Local Government Committee Wednesday. The House and Senate are planning to pass all map proposals by Saturday.

The new Senate map proposal is filed under Senate Bill 2 and is co-sponsored by Senate President Robert Stivers and Sen. Robby Mills. The redistricting maps plan does not pit any incumbents against each other but makes some changes to districts based on population shifts over the last 10 years. 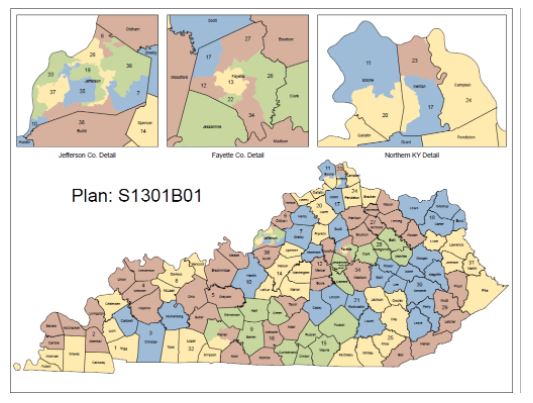 Both Stivers and Mills noted large population shifts out of the eastern and western parts of the state and into central and northern Kentucky, which is why many of the changes were made. The cosponsors said they have worked hard to ensure the fewest number of counties are split up in any way but because of population, five high population counties, including Fayette, Jefferson, Warren, Boone and Kenton, will have some splits.

Some shifts to the Fayette County area make changes to the 12th District, where there is currently a competitive GOP primary to replace retiring Sen. Alice Forgy Kerr. The proposed district would now mean that two of the individuals running in that primary would no longer reside in the district, making them ineligible to represent the area.

Another notable change is in the 7th District, where first-term incumbent Adrienne Southworth would keep her home county of Anderson, but exchanges Franklin, Owen, Gallatin and Woodford for Shelby, Henry and a portion of Jefferson. Franklin, Owen and Gallatin would move to Senate District 20, currently held by the retiring Sen. Paul Hornback.

Some other changes came in Jefferson County districts, as well as a new 6th District, comprised of parts of Jefferson, Oldham and Trimble Counties. The rest of the former 6th District territory, which has been represented by retiring Sen. C. B. Embry, would be divided by Muhlenberg County to the 3rd District, Hopkins County to the 4th District, and Butler and Ohio Counties to the 5th District.

Senate Bill 2 passed the committee 8-2 and now moves to the Senate floor for its 2nd reading and a planned vote Thursday.