LOUISVILLE, Ky. — Waterfront Park has been nominated for best Riverwalk by USA Today’s 2022 10Best Reader’s Choice travel awards. It is the only attraction in Kentucky included on the nominee’s list and among a select 20 named from across the country.

As part of this competition, individuals will be able to vote once per day for their favorite American Riverwalk. The competition starts March 14 at noon and ends Monday, April 11 at midnight (11:59 p.m.). 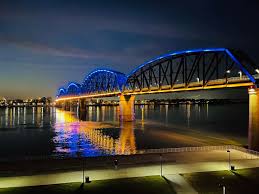 “We are once again thrilled to be nominated by the editors of 10Best as one of America’s top 20 riverwalks,” said Deborah Bilitski, president and executive director of Waterfront Park. “Waterfront Park’s historic transformation over the last 20 years is a testament to the collective efforts of our community, and we continue to grow and expand. Waterfront Park is more than just a green space, it is a welcoming environment that marries the beauty of nature and community.”

Waterfront Park was developed in the late 1990s and has transformed the waterfront into a magnificent green gateway to the Commonwealth of Kentucky.  It is today a nationally acclaimed destination for more than 500,000 visitors from outside the region to explore, learn and experience the beauty of Kentucky’s riverfront. The inception of Waterfront Park started as an idea to clear the once damaged and neglected riverfront, turning the land into an oasis of green space for the community to utilize in a variety of ways. Today, as the most utilized urban park in the city of Louisville, Waterfront Park welcomes over 2.2 million visitors each year and is home to hundreds of events, concerts and gatherings.

The transformation of Louisville’s waterfront over the last 20 years is a testament to the concerted efforts of the Waterfront community. Waterfront Park is more than just an urban green space in the heart of downtown Louisville, it is a place to celebrate the welcoming environment of nature and community that comes with it.  Whether it’s a stroll on the Big Four Bridge, an afternoon picnic with friends, or a concert on the Great Lawn, everyone has a chance to see why Waterfront Park is so special.

Last year, Waterfront Park was recognized as a top ten best riverwalk by USA Today’s 2021 10Best Reader’s Choice travel awards, competing with 20 riverwalks across the country and finished sixth in the category.