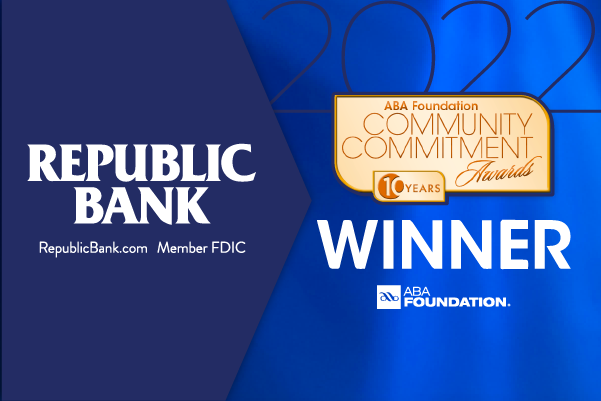 LOUISVILLE, Ky. — Republic Bank & Trust Company has earned the prestigious 2022 American Bankers Association (“ABA”) Foundation Community Commitment Award. The award was given to Republic for its work in the Community and Economic Development category.

Just seven banks across the entire country were honored with Community Commitment Awards by the ABA Foundation in 2022. The ABA represents the nation’s $23.7 trillion banking industry composed of small, regional, and large banks that employ more than 2 million people together.

Award winners were chosen by a field of nationally recognized experts who chose the winning banks based on the creativity and thoughtfulness of programs that embody the ideals of corporate social responsibility and demonstrate success in measurable terms. Republic’s initiative, which united nine community banks to complete funding for the Louisville Urban League’s Norton Healthcare Sports and Learning Center and allowed the facility to open in early 2021, was called out by the ABA as an example for banks nationwide of how to make a difference in their communities.

The award will be presented during ABA’s Annual Convention on Oct. 4 in Austin, Texas. To learn more about the ABA Foundation Community Commitment Awards, visit aba.com/awards.