LOUISVILLE, Ky. — Bourbon & Beyond returned in a big way this past weekend, bringing in over 140,000 attendees, breaking an attendance record for the festival.

Held over four days for the first time – September 15-18 – at the Highland Festival Grounds At The Kentucky Exposition Center in Louisville, the World’s Largest Bourbon & Music Festival offered something for everyone. The one-of-a-kind entertainment offerings included some of the best and brightest music stars in Americana, roots, blues, country and rock n roll, as well as a range of culinary programming from some of the country’s top chefs and a wide palette of bourbon tastings and workshops celebrating the rich culture of Louisville.

The festival has now announced 2023 dates, to be held over the weekend of September 14-17 at its home at the Highland Festival Grounds At The Kentucky Exposition Center. Weekend GA and VIP passes, along with camping, are on sale now for $10 down at www.BourbonAndBeyond.com. 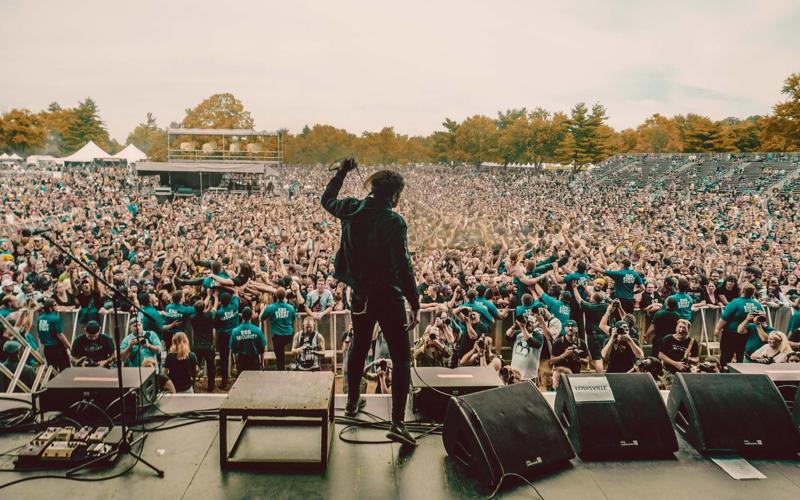 Bourbon & Beyond’s memorable music performances included a rousing set by fan favorites Pearl Jam on Saturday in their only U.S. festival appearance this year. It was also the first time the band has played a Danny Wimmer Presents festival and their first time back in Louisville since 1994. The quartet played a number of hits from their classic debut album Ten and ended with a cover of Prince’s “Purple Rain.” Earlier in the day, singer Eddie Vedder made a surprise appearance during a set from Crowded House’s Neil Finn and son Liam Finn. Vedder guested on “World Where You Live” by Crowded House as well as “I Got You” by Neil Finn’s former band Split Enz.

Sunday’s headliner and Kentucky native Chris Stapleton delivered a stacked set that merged country, southern rock and blues and showed why he’s been named the Academy of Country Music’s first-ever Artist-Songwriter of the Decade. In addition to his mega-hits like “Parachute,” Stapleton also brought out guitarist Mike Campbell for a few songs. Campbell – known as a member of Tom Petty and The Heartbreakers – had a set earlier in the day with his band The Dirty Knobs and later joined Stapleton for a cover of Tom Petty and The Heartbreakers’ “I Should Have Known it” as well as the song “Arkansas” that he wrote with Stapleton.

Thursday night closed with a knock-out set from Jack White, who covered parts of his entire catalog with solo works as well as numbers from The White Stripes, The Raconteurs and The Dead Weather, including “The Hardest Button To Button” and “Steady As She Goes.” The performance comes at a time that American Songwriter calls “one of the most significant years” in his life.

Friday night also featured headliner Kings Of Leon, fresh off a summer tour of Europe and their first show in Louisville since 2017, delivering hits like “Sex On Fire” and “Use Somebody.” Also that day the Followill family unveiled their brand-new whiskey line “Kiamichi” at Bourbon & Beyond, which offers 5-year rye, 8-year rye, and a 19-year bourbon available to buy later this year.

In addition to music, there was also a very special appearance by the stars of “It’s Always Sunny In Philadelphia,” Glenn Howerton, Charlie Day and Rob McElhenney, who brought their popular “The Always Sunny Podcast” on the road for the first-ever live taping in the podcast’s history. The trio also stopped by the Kentucky Venues Culinary Stage presented by Kentucky Proud and GE for a matchup with chef Tiffani Faison in which they cooked and chatted about their new Four Walls Irish American Whiskey.

In addition, James Beard nominee Anthony Lamas of Louisville’s Seviche curated a fine dining experience for Beyond VIP and Rocks Room presented by Zelle guests throughout the festival weekend, the latter offering a one-of-a-kind dinner and a show opportunity with intimate performances from St. Vincent, Caamp, Courtney Barnett and Shakey Graves.

The Team Kentucky Bourbon Stage hosted by Chris Blandford and Trish Suhr also had memorable activities including crowning the winner of the Louisville Cocktail Competition presented by Kroger after Mayor Greg Fischer called on all Kentucky Bourbon Brands to participate in the event earlier this summer. Judges included Mayor Fischer as well as leading bourbon authority Fred Minnick, Black Bourbon Society’s Samara B. Davis, chef Chris Santos and Bourbon Women’s Peggy Noe Stevens. The winner was S.C. Baker with Knob Creek, who took home the $15,000 cash prize and is forever known as the maker of “The Louisville.”