NEWPORT, Ky. — Northern Kentucky University has launched Newport History Walk. This new smart phone app takes users on a six-stop, self-guided tour of the river city’s rich and important history. Users can listen to a short podcast at each stop about the historic site. 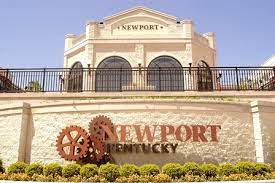 “Users can just grab their smartphone and their walking shoes and follow the map on the Newport History Walk app to six historic sites that help tell the story of our town,” said Newport Historic Preservation Officer Scott Clark. “Users can also take the tour from home, but for the full experience, they should take this walk through history.”

The Newport History Walk app was co-produced by the Scripps Howard Center for Civic Engagement and NorseMedia, both at NKU. Students wrote and recorded scripts for each historic site based on stories originally written for “Our Rich History,” a weekly column published by the Northern Kentucky Tribune digital newspaper.

“The Newport History Walk is a designed as ‘museum without walls’ that takes you to historic sites in Newport and interprets those sites orally while you are standing next to them,” said Mark Neikirk, the executive director of NKU’s Scripps Howard Center for Civic Engagement. “One of the principal goals of NKU’s community engagement is to find projects that provide an experiential learning opportunity for our students but also provide value to the community. This project checks those boxes.”

The tour includes stops at the following historic sites:

The Newport History Walk app takes about an hour to complete and can be done all at once or broken up into phases. The app be downloaded from the iPhone or Android app stores. It is family-friendly, can be accessed any time and is easy to use as it tells the story of Newport’s place in the region’s history.  The Scripps Howard Center for Civic Engagement began focusing on Newport’s Westside – Northern Kentucky’s oldest neighborhood – in 2012 as part of a long-term, place-based community engagement initiative that included exploring the neighborhood’s history.  After a graduate class in local history began producing essays on the neighborhood, NKU Professor Dr. Paul Tenkotte, a prolific writer and recognized expert in Northern Kentucky history, committed to producing a year of essays that were published in the Northern Kentucky Tribune under the “Our Rich History” banner. A student intern, Shelby Doyle, worked with students in Theater and Electronic Media & Broadcasting classes to produce scripts for podcasts on the history. Ms. Doyle recorded the scripts by working with NorseMedia, a student group in which communication majors produce audio and video projects as co-curricular activities. The podcasts were paired with images from the Our Rich History articles and then uploaded to the Newport History Walk’s app, which is a platform created by www.stqry.com. More sites will be added in the future.