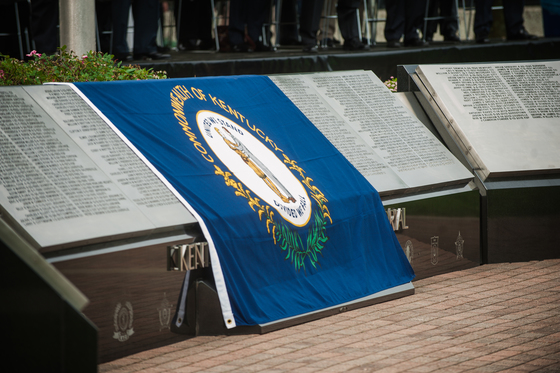 RICHMOND, Ky. (May 18, 2018) – Five Kentucky law enforcement officers who lost their lives in the line of duty will be honored at the Kentucky Law Enforcement Memorial ceremony on Thursday, May 24 at the memorial monument site in Richmond, Ky.

The loss of four Kentucky peace officers who have died in the line of duty in 2018 will be recognized, but their names will not be added to the monument until the 2019 ceremony.

The ceremony will be conducted at 11 a.m. at the Kentucky Law Enforcement Memorial, located at DOCJT on Eastern Kentucky University’s campus. The Kentucky State Police Honor Guard will present colors and the Louisville Metro Police Department will conduct the 21-gun salute.

This year’s historical recognitions range from 1881 to 2015, but their names only recently were added to the national memorial. A name must meet two criteria before it is placed on the Kentucky Law Enforcement Memorial; first it must already appear on the National Law Enforcement Memorial, and second, a KLEMF nomination form must be completed and submitted.

The Kentucky Law Enforcement Memorial monument is the only monument in the commonwealth that recognizes nearly all Kentucky peace officers who have been killed in the line of duty. This year’s additions bring the total number of names on the monument to 541.

The memorial foundation was established in 1999 to build the unique memorial. Once the monument was completed in 2000, the organization expanded its efforts to include an ongoing financial endowment program, which helps Kentucky peace officers and their families with educational, medical and emergency needs.