LEXINGTON, Ky. — Dropping inventory continues to be the main concern as the Kentucky housing market continues to hum along at a near-record pace. The first quarter of 2019 closed with 10,322 homes sold, down just one percent over the same period last year. Kentucky home sales in March were down less than a half-percent over March 2018 at 4,252.

Existing-home sales retreated in March, following February’s surge of sales, according to the National Association of Realtors. Each of the four major U.S. regions saw a drop-off in sales, with the Midwest enduring the largest decline last month. Lawrence Yun, NAR’s chief economist, anticipated waning in the numbers for March.

“It is not surprising to see a retreat after a powerful surge in sales in the prior month. Still, current sales activity is underperforming in relation to the strength in the jobs market. The impact of lower mortgage rates has not yet been fully realized.”

Both 2019 year-to-date and March housing inventory numbers fell about 3 percent. This inventory shortage continues to drive up the median sale price of residential units in Kentucky. March’s inventory currently stands at 3.65 months. Rising sale prices should eventually moderate the number of units sold and slowly boost inventory, but we are not seeing this happen yet.

March’s days on market number stands at 118 days, which is down slightly from 120 days in March of last year. The year-to-date number is slightly lower at 116 days, which is the lowest point in well over a decade.

Rip Phillips, president of Kentucky Realtors, said that despite early talk of a possible housing downturn in 2019, Kentucky is seeing no signs of flagging numbers.

“GDP is up 3.2 percent as the U.S. economy grew at a faster pace than expected in the first quarter and posted its best growth to start a year in four years”, Phillips said. “The numbers we are seeing statewide right now are indicating that we might see another near-record year like we did in 2018.”

Kentucky Realtors is one of the largest and most influential associations in Kentucky. Founded in 1922, Kentucky Realtors represents more than 11,000 Realtors who are involved in all aspects of real estate, including residential and commercial real estate brokers, sales agents, developers, builders, property managers, office managers, appraisers, and auctioneers.

To view housing statistics for the state, as reported to Kentucky Realtors, visit housingstats.kyrealtors.com. 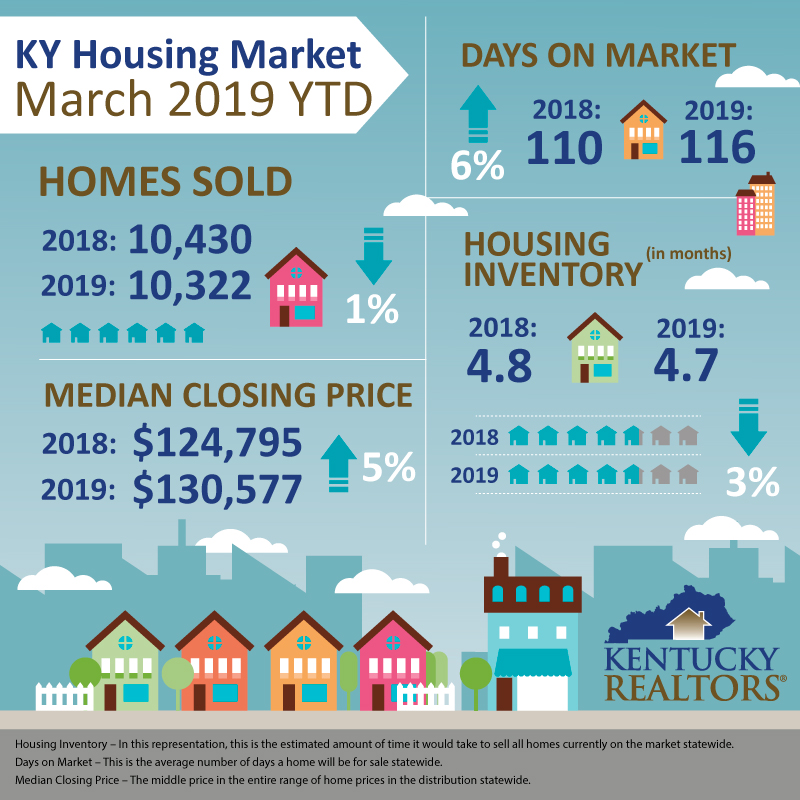