The preliminary April 2019 jobless rate was down 0.4 percentage points from the 4.4 percent recorded for the state in April 2018.

The U.S. seasonally adjusted jobless rate for April 2019 was 3.6 percent, down 0.2 percentage points from its March 2019 level, according to the U.S. Department of Labor.

Kentucky civilian labor force increased by 426 individuals in April 2019, bringing the state’s labor force to 2,065,210. The number of people employed in April was up by 478, while the number unemployed decreased by 52.

In a separate federal survey of business establishments that excludes jobs in agriculture and people who are self-employed, Kentucky’s seasonally adjusted nonfarm employment increased by 4,000 jobs in April 2019 compared to March 2019. Kentucky has added 19,500 jobs since April 2018, a 1 percent employment growth.

“The household survey suggests that Kentucky’s employment situation was essentially unchanged in April,” said University of Kentucky’s Center for Business and Economic Research (CBER) Associate Director Mike Clark, Ph.D. “While a relatively small number of people entered the labor force this month, a similar number of people were able to find work, resulting in no significant change to Kentucky’s unemployment rate. The survey of business indicates that Kentucky’s employers expanded their payrolls, adding 4,000 jobs.” 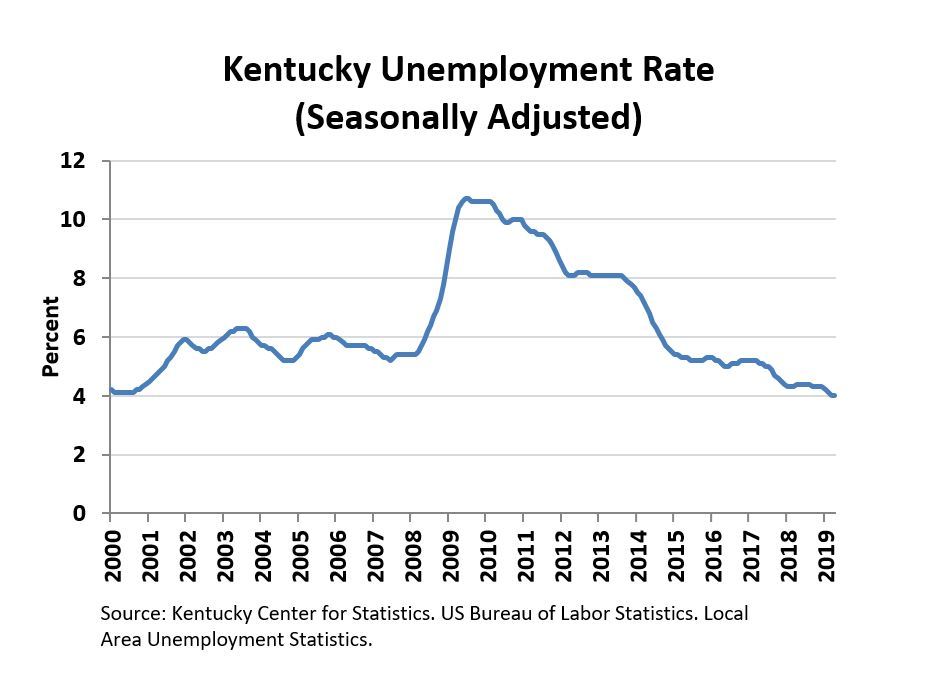 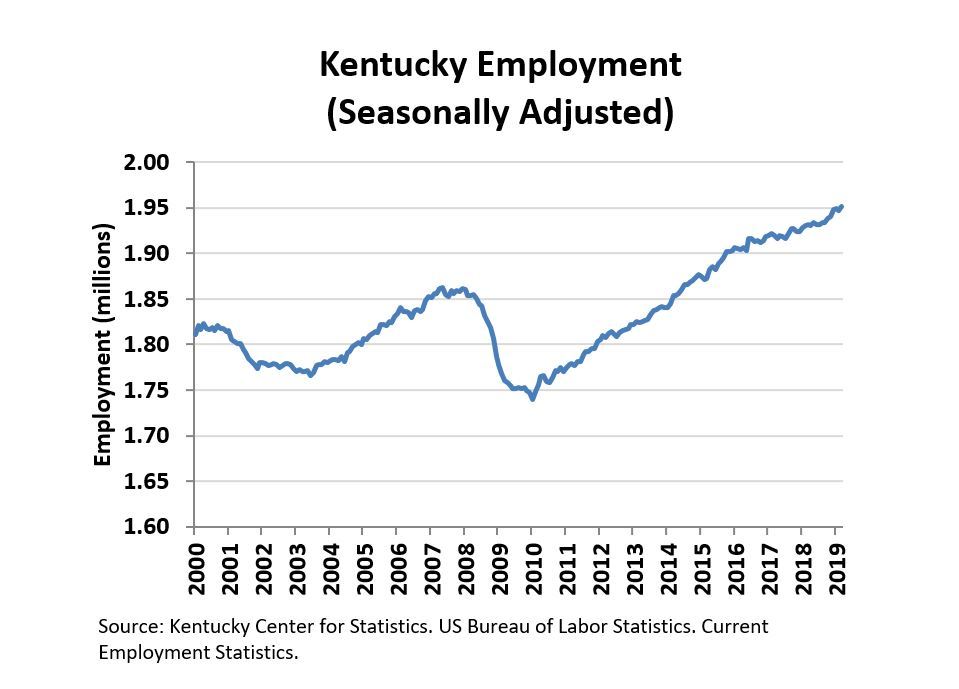 Nonfarm data is provided by the Bureau of Labor Statistics’ Current Employment Statistics program. According to this survey, six of Kentucky’s 11 major nonfarm North American Industry Classification System (NAICS) job sectors saw employment increases from the previous month while four declined and one was unchanged.

Employment in Kentucky’s professional and business services sector jumped by 1,900 jobs in April 2019 or 0.9 percent. This sector was down 400 jobs since April 2018. Administrative and support and waste management subsector gained the most jobs with 1,600 in April 2019.

Kentucky’s leisure and hospitality sector gained 700 jobs from March 2019 to April 2019, an increase of 0.4 percent. This sector is up 3,100 positions since April 2018. The accommodations and food services subsector added 1,300 jobs, while the arts, entertainment and recreation subsector lost 600 positions in April 2019.

Construction employment increased by 400 jobs in April or 0.5 percent. The construction sector is up 1,800 jobs during the past 12 months for a gain of 2.3 percent.

Employment in Kentucky’s mining and logging sector was unchanged in April and was up by 200 positions from a year ago for a gain of 2 percent.