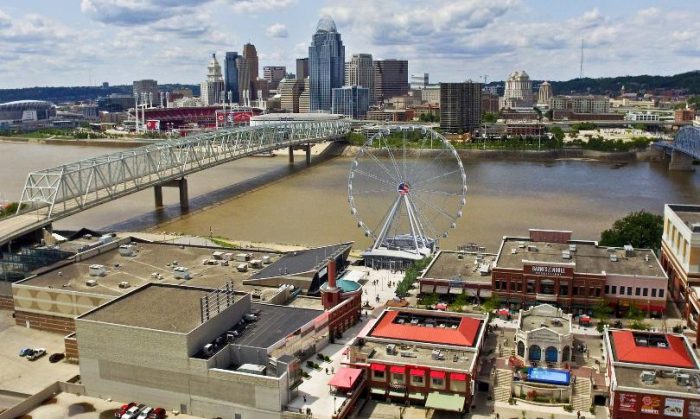 “This project will be the missing link connecting Newport on the Levee to Monmouth Street and the Central Business District,” said Newport City Manager Tom Fromme. “It’s another piece of the puzzle for downtown development and part of the rapid and remarkable transformation for our heavily-trafficked downtown corridor.”

The vote comes less than a week after plans were announced for a new music and entertainment venue at the riverfront Ovation site.

Plans for the Peace Bell site—which is bordered by Monmouth, York, Fourth and Fifth street—call for a 144-room hotel, a 49,000-square-foot mixed-use building that will include retail and office space and a 350-space above-ground parking garage. The hotel will face Fourth Street; the retail and office building will front Monmouth Street.

The hotel brand has not been announced but developers of the project—World Peace Bell Hospitality—told city officials Monday the brand will most likely be a Home2 Suites by Hilton. Negotiations with a potential office tenant are ongoing.

Construction will begin in about a year on the hotel and parking garage. The development of the mixed-use building will follow in the second phase of the project.

The World Peace Bell will remain on the site but the building housing Southbank Partners will be demolished. Southbank will likely relocate to space in the new development.

On Monday, the city commission formally approved a Memorandum of Understanding with the developers, which also own and operate the nearby Hampton Inn in Newport as well as hotels in the Cincinnati suburbs.

Fromme said the occupancy rate at the Newport Hampton Inn is 92 percent.

The city commission also approved the use of Industrial Revenue Bonds to provide financing for the project. Often used by Newport and other local governments as an economic development tool, industrial revenue bonds permit cities to providing funding for economic development projects without being responsible for repaying the bonds.

In addition to the Ovation music venue, work is being completed on the Academy on Fourth, a multi-level apartment building across the street from the World Peace Bell site. And Cincinnati-based North American Properties has pledged to invest an estimated $100 million in the redevelopment of Newport on the Levee.

The project will also more than double the available parking in that area of downtown Newport, said Vice Mayor Tom Guidugli Jr.

The city explored developing an underground parking garage, but it was cost prohibitive.

“We have parking challenges and this project will be a major improvement to the entire downtown corridor,” Guidugli Jr. said.