The success of its Investing in Kentucky’s Future (IKF) initiative has prompted the Foundation to expand its work in obesity prevention and childhood trauma interventions. For example, in May the Foundation announced another $200,000 grant in Russell and surrounding counties to address childhood trauma in a rural setting. This grant builds on an urban demonstration program that was part of the IKF initiative. 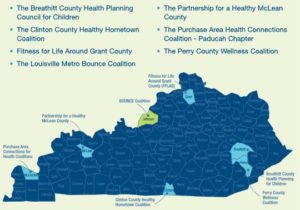 The initiative supported demonstration programs in seven Kentucky counties and was designed to reduce the risk that school-aged children will develop chronic diseases later in life. The communities contributed another $1.7 million in matching funds under the initiative, which reached nearly 13,000 students in 28 participating schools.

“Health is something that people don’t typically recognize as a community undertaking, and this initiative aimed to transform that thinking and set in motion a series of changes that will lead to healthier, more productive adults throughout each participating Kentucky county,” said Foundation president and CEO Ben Chandler. “Our approach was to engage diverse, local alliances to bring about youth behavior changes, environmental improvements, increased community involvement, and the adoption of new policies. Now we’re sharing what’s been learned so other Kentucky communities can replicate these achievements.”

Six of the Foundation’s IKF grantees — in Breathitt, Clinton, Grant, McLean, McCracken and Perry Counties — selected childhood obesity prevention as the issue they would address through the initiative. The Jefferson County coalition focused on Adverse Childhood Experiences (ACEs) and building resilience in children who have faced trauma. These issues are complex and influenced by a variety of biological, behavioral, social and environmental influences, so they require the cross-sector approach that coalitions can bring, the Foundation said. 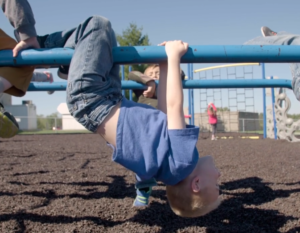 The grant “gave us an opportunity to do something big and to really make an impact and we’ve done that,” said Marsha Bach, a member of the Grant County Coalition, Fitness for Life Around Grant County (FFLAG) and a health promotion manager with the Northern Kentucky Health Department, in the obesity prevention video. FFLAG’s final report to the Foundation said, “… the experience has set us up to pursue other large grants and feel confident doing so.”

Unlike most philanthropic grants, the IKF initiative’s community-driven approach allowed the local coalitions to choose the topic on which they wanted to focus, and then funded a one-year planning phase during which the Foundation also provided training and technical assistance in the development of a business plan. This made the grant program more accessible to small communities with fewer resources, said Amalia Mendoza, senior program officer at the Foundation, who developed and oversaw the grant. Mendoza also coordinated twice-yearly Coalition member training from national and state experts in areas such as youth engagement, health equity, and developing policies and influencing policymakers.

“Each community coalition selected the health issue they found more pressing as it related to the health of children in their communities,” Mendoza said. “Six years later, they have greatly expanded tools to address additional root causes of poor community health.”

“Participants told us that identifying a local champion and engaging the school system were critical to success in each of the counties,” Chandler said. “But by far the most decisive factor was ensuring that the local health coalition includes multiple members from a broad range of community organizations – schools, hospitals, elected officials, youth groups, and businesses. It takes more time to get everyone aligned but the resulting collaboration makes all the difference in creating long-term change to improve health.”

School-based interventions were ideal for both issues, Mendoza said, because kids spend more than 1,000 hours a year and consume up to half their daily calories at school. The Foundation is now working to create a statewide school-based health coalition to share and implement some of the lessons learned in the IKF initiative.

Among the IKF initiative’s successes highlighted in the report: 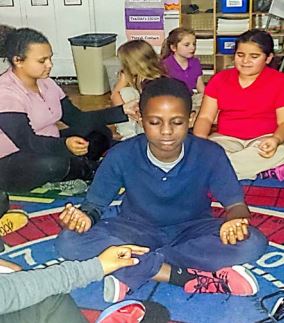 First-grade JCPS teacher Christina Carter said the Bounce training and support helped her form stronger relationships with her students so she could better address those issues that made it difficult for them to focus at school.

“This was the most close-knit class I ever had, and I owe it all to the Bounce Program,” she said.