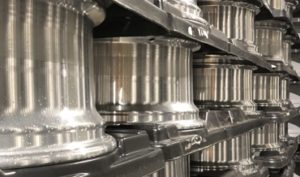 “Kentucky’s automotive industry remains in high gear, and this expansion by Central Motor Wheel of America is the latest example of a thriving industry,” Gov. Bevin said. “The Bourbon County community will benefit greatly from this substantial job creation as CMWA increases production to better serve customers. We are grateful for the company’s commitment to the commonwealth and for its significant impact within Kentucky’s automotive industry.”

The broadened project will increase CMWA’s production by 50%. The 145 new jobs – atop the operation’s current 550 employees – include production, maintenance and engineering. Work on the expansion will begin this month and company executives expect production to begin in July 2021.

“We are extremely excited to get our expansion project underway,” said CMWA Executive Vice President Jeff Birdsong. “This project will expand our production capacity to support our customers’ increased demand for aluminum wheels in North America. Our new facility will be more streamlined and equipped with the latest technologies.”

Sen. Steve West, of Paris, expressed gratitude for the investment and job creation.

“I want to congratulate Central Motor Wheel of America for this major investment affording them 145 new jobs,” Sen. West said. “Thank you to all those involved for prioritizing responsible growth and job creation here in the Paris community.”

Rep. Matthew Koch, of Paris, said this is just the start of great news for the local area.

“This announcement is terrific news for our community, as this significant investment will put 145 of our citizens to work and improve the economic well-being of Bourbon County,” Rep. Koch said. “Creating good paying, long-term jobs and growing our local economy are my top priorities, and I look forward to working toward more announcements like this. I want to thank CMWA for this tremendous investment and for their confidence in our area’s workforce.”

“It is with great excitement and anticipation that we announce a manufacturing expansion at CMWA,” Mayor Plummer said. “This will create additional job opportunities for our current residents and furthermore give our youth another reason to stay in Paris and raise their families. I want to thank the local economic development board as well as the Kentucky Cabinet for Economic Development for their hard work and diligence in making this expansion possible.”

Bourbon County judge-executive Michael Williams said CMWA is a great example of how to grow a business in the region.

“Bourbon County is thrilled with the news about CMWA’s planned expansion. Their impact on our community has been so very positive and for so many years. Their expansion plans will truly enhance their reputation as the industry leader and bring so much positive attention to their business and their workforce,” Williams said. “CMWA is our leading employer in Bourbon County and the expansion and significant growth in jobs will further solidify their position of positive impact to our economy. Their decision to expand in Bourbon County is an indication of a great relationship with our community, our workforce and our local governments, both county and city. We look forward to them continuing to be an inspiration for other businesses who will consider our community for future growth and prosperity.”

“The PBCEDA is ecstatic about the planned expansion announced by Central Motor Wheel of America Inc., which will result in the creation of 145 full-time jobs and $111.9 million investment in our community,” Wilson said. “The PBCEDA appreciates the corporate and community partnership that the PBCEDA, City of Paris and the Bourbon County Fiscal Court have forged with Central Motor Wheel of America, Inc., over the last three decades. It has been a privilege to work with CMWA Executive VP Jeff Birdsong on this expansion and we look forward to continuing our relationship with CMWA.”

To encourage the investment and job growth in the community, the Kentucky Economic Development Finance Authority (KEDFA) in October 2015 preliminarily approved the company for up to $1.75 million in performance-based incentives through the Kentucky Business Investment (KBI) program based on the original project’s scope. KEDFA may modify the agreement in the future to reflect the additional jobs and investment. KBI’s performance-based incentives allow companies to keep a portion of the new tax revenue they generate over the agreement term through corporate income tax credits and wage assessments by meeting job and investment targets.

KEDFA in October 2015 also approved CMWA for up to $200,000 in performance-based tax incentives through the Kentucky Enterprise Initiative Act (KEIA). KEIA allows approved companies to recoup Kentucky sales and use tax on construction costs, building fixtures, equipment used in research and development and electronic processing.

A detailed community profile for Bourbon County can be viewed here.