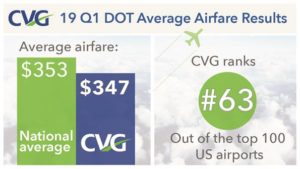 ERLANGER, Ky. — The U.S. Department of Transportation released its average airfare ranking report for first quarter 2019, and the Cincinnati/Northern Kentucky International Airport (CVG) once again has the lowest airfares in the region. Among the top 100 U.S. domestic airports, CVG ranked 63rd. The CVG average fare of $347 made CVG the only airport in the region to have lower airfare than the national average of $353.

Below is a summary of the CVG report: