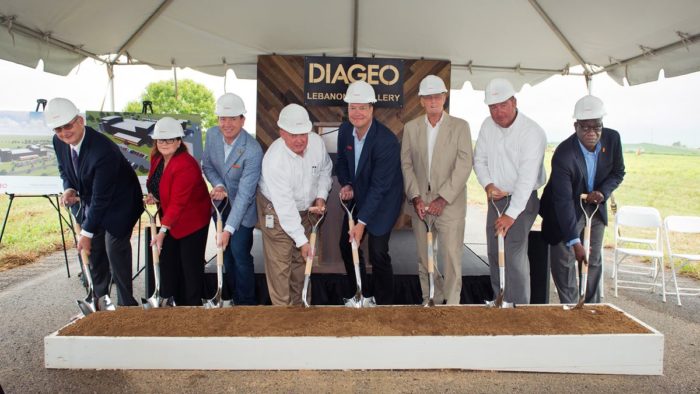 The facility, sitting on an approximately 144-acre property at “100 Bourbon Drive” will include a 72,000 square-foot distillery and dry house, as well as 12 barrel warehouses. As previously announced, the site will have the capability to distill a variety of Diageo bourbon and American whiskey brands.

“Today marks a significant moment in Diageo’s continued commitment to the Kentucky spirits industry, as we officially begin construction on the Diageo Lebanon Distillery and become a member of the Marion County community,” said Erik Snyder, president, North America Supply and Procurement for Diageo. “We are appreciative of the county, city, state and community leaders, and the support they have shown in our journey to this day.”

Once open, the Diageo Lebanon Distillery will employ approximately 30 full-time team members. Since 2014, Diageo has invested more than $300 million in Kentucky. This facility will supplement the company’s other Kentucky operations: Stitzel-Weller in Louisville, and The Bulleit Distilling Company and Visitor Experience in Shelbyville, which collectively employ more than 100 additional people.

“Diageo is providing new jobs and business growth and investing in our future workforce,” said Lebanon Mayor Gary Crenshaw. “This investment provides a bright future for, and enhances our community’s economic vitality, and we welcome them.”

“One thing I’ve learned about Diageo doing business in Kentucky is that it is focused on environment and sustainability and cares for every community it builds,” said Tom Lund, president, Marion County Economic Development. “We are excited to have Diageo extend its footprint right here in Lebanon.”

1.92 million people have received at least first dose of COVID-19 vaccine in Kentucky