In fact, Louisville Forward says advanced manufacturing accounts for 17% of the regional GDP (to the tune of $11 billion), and the average annual compensation for a manufacturing worker is almost $71,000. In 2017, Forbes even named Louisville the No. 1 city in the United States where manufacturing is thriving.

It’s not hard to see why. One of the region’s primary manufacturers is Ford Motor Co.’s Louisville Assembly Plant. Louisville is home to the company’s largest presence outside of Detroit and is best known for producing Super Duty pickups, Lincoln Navigators and other trucks in its 6 million s.f. Kentucky Truck Plant space that employs almost 8,000 people.

In March 2019, Ford announced plans to increase production on the Ford Expedition and Lincoln Navigator and will add 550 jobs at the Kentucky Truck Plant and increase vehicle production by 20%. This follows up an announcement back in 2017 from Ford that it would invest $900 million in the Kentucky Truck Plant. The Expedition and Navigator are both full-size SUVs that will be exported to more than 55 markets globally.

And a new compact SUV from Lincoln – the 2020 Lincoln Corsair, formerly known as the Lincoln MKC, will be built at Ford’s Louisville Assembly Plant. It shares parts with the Ford Escape, which also is built in Louisville.

The region’s automotive exports expand far beyond vehicles and include auto components manufacturers like Piston Automotive and many others. In April 2019, Piston announced plans to invest $1.5 million for an expansion of its Louisville operation, which will create 50 new full-time jobs on top of the 85 already there. The project will allow for the installation of a new production line and increased capabilities to support new market demand.

“Our investment in the Louisville facility is a direct result of growth with one of our key customers, Ford; the support we’ve received from the community; and the hard work our employees have put in to make Piston Automotive successful,” said Piston Group Chairman and Founder Vinnie Johnson at the announcement.

Winning recipe for food and beverage

Greater Louisville is also known globally as a food and beverage hotbed – both in the headquarters and manufacturing spaces.

It has a wide range of distilleries and craft distillers that contribute heavily to the state’s eye-popping bourbon production. Bourbon is an $8.6 billion signature industry in Kentucky, generating 20,100 jobs with an annual payroll of $1 billion. The state as a whole has a total inventory of 7.5 million barrels of bourbon – the highest inventory in more than 40 years.

The secret recipe for one of the world’s top brands, Kentucky Fried Chicken, is kept in a vault at its Louisville headquarters.

In nonalcoholic liquids, Greater Louisville is also known for things like beverage flavorings and colors, and countless other food and drink manufacturing operations.

The company is investing approximately $56 million in the project, including construction and equipment costs. Plans also call for the full-time employment of approximately 49 new workers at the new facility.

“We have been impressed by the region’s progressive workforce development programs and support system,” said Brian Hess, executive vice president for Niagara, in a press release.

It’s another example of the rapid growth of River Ridge – where dozens of manufacturers and offices already call home.

On the sweeter side, Cellar Door Chocolates, a premium chocolate confectionary company, announced in February a significant planned expansion of operations to meet growing demand. The company, which was originally established in 2007, is crafting a new headquarters, production facility and tasting room within the Heine Brothers’ Coffee corporate office and roastery building at 1301 W. Main St. in Louisville.

Cellar Door, known for its truffles, bourbon balls, brittle and caramels, will continue to operate its two retail studios in Butchertown and downtown Louisville.

“This building is going to be an amazing destination point in the Portland neighborhood,” said Cellar Door Chocolates Founder Erika Chavez-Graziano in a press release. “It has a vibe that you can only get from a turn-of-the-century building.”

Part of the reason Greater Louisville has such success in the manufacturing space is because of its talented workforce and pipeline of workers. Creating a continued pipeline is essential, and the city works with various organizations such as Kentucky Manufacturing Career Center, Kentucky Federation of Advanced Manufacturing Education (KY FAME) and local schools and universities.

According to Louisville Forward, the region’s manufacturing employment is a 20% greater share than the national average. Also, there are 14 major automotive original equipment manufacturers (OEMs) within 250 miles of Louisville, creating an easy stream of products required to manufacture some of the region’s signature products – like the Ford/Piston example.

Continued manufacturing growth is expected in Louisville, and it’s expected to get even more high tech.

Contributing to that trend is the innovative FirstBuild, a makerspace dedicated to designing, engineering, building and selling the next generation of major home appliances and more. It is backed by GE Appliances. In October 2018, GE announced it will invest $200 million in upgrades to expand laundry and dishwasher manufacturing. Appliance Park in Louisville is GE Appliances’ largest manufacturing facility, with more than 5 million s.f. of production space.

Some of Louisville’s largest manufacturing firms include:

American Printing House for the Blind

Manufacturers from the surrounding counties include: 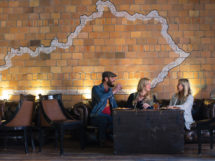 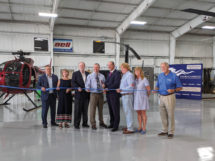