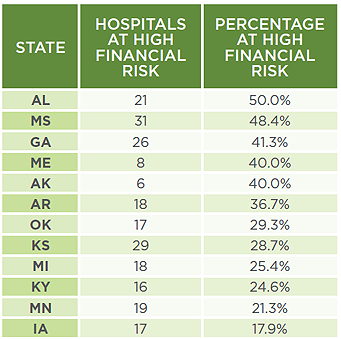 LEXINGTON, Ky. — Many rural hospitals across Kentucky are struggling to keep their doors open. And though the numbers vary on just how many are in dire financial straits, the conclusion is the same: in much of rural Kentucky, health care as we know it is in trouble.

“We can’t keep doing health care the way that we’ve done in the past, and that’s the bottom line,” Dr. Dan DeBehnke, managing director of healthcare at Navigant Consulting Inc., told Kentucky Health News. “But the other key component to that is that there’s not a single magic bullet.”

DeBehnke is a former health system CEO and co-author of a Navigant study released in February, which concluded that 16 of Kentucky’s rural hospitals, or almost one-fourth of the total, are at high risk of closing unless their finances improve. The study considered 65 of Kentucky’s 129 hospitals to be rural.

Another report, released in April, concluded that eight rural Kentucky hospitals are at high risk of financial distress; and 12 are considered to have mid-high risk of such distress. The report was done by the Cecil G. Sheps Center for Health Services Research at the University of North Carolina, using a distress-index model it has developed in tracking rural hospitals for a decade.

And a recent Kentucky Hospital Association analysis, using 2017-18 data, concluded that 35 of the 70 Kentucky hospitals it considers rural are in poor financial health.

KHA told Kentucky Health News in an e-mail that the “good news” is that 21 of the 35 are owned by larger hospital systems, “so it is more likely that they will continue to have support. However, that leaves 14 hospitals very vulnerable [and] 10 of these 14 are critical-access hospitals.”

Critical-access hospitals get slightly higher Medicare and Medicaid reimbursements in return for limiting their size and services. Kentucky has 27 of them.

KHA recently replicated a narrower study that looked at the financial health of 44 rural hospitals in 2015 and found that their situation has worsened. The first study found that 15 of the 44, or 34%, were in poor financial health. The updated study added eight more to the list, bringing the number to 23, or 52 percent of the total..

While the numbers in these studies vary because they define financial risk differently, Navigant’s DeBehnke told Kentucky Health News that the message to be taken from them is clear.

“The message is the same,” he said. “Rural health care is facing a crisis.”

The crisis becomes more real every time a rural hospital closes. Nationwide, 113 have closed since 2010, according to the North Carolina center. Five have closed in Kentucky since 2009, four of them since 2014. A hospital is considered closed if it has stopped providing inpatient care, even if it still offers other services, like emergency or primary care.

A main reason rural hospitals are struggling, said DeBehnke, is that patient care has shifted from an inpatient model to an outpatient one, which has left them overstaffed and underused.

“The average rural hospital has about 50 beds and has an average daily census — so, patients actually in beds every day — of seven,” he said. “They are utilizing well less than 50% of their capacity and they’ve got about 300 employees.”

He also pointed to the loss of agricultural and manufacturing jobs in rural communities, leaving them with a shrinking population that tends to be older and poorer, meaning they are likely to be uninsured or on Medicaid or Medicare, which don’t pay for the total cost of care.

The Navigant report adds that “budget-strapped” rural hospitals are also unable to invest in updated, innovative technology due to a lack of capital.

“It’s a mixture of a lot of different things that have kind of come to a head at this point,” DeBehnke said.

KHA said last-minute changes to a rule that changes how Medicare reimburses the bottom 25% of hospitals for their “wage index” will cause a $2.6 million loss to Kentucky hospitals instead of the $4 million increase they would have gained under the original version. Some Kentucky hospitals in the bottom 25% will benefit from the extra money, but eight that would have been helped from this new rule will be worse off under the new formula, says KHA.

Cuts in the Medicare program that helps hospitals with a “disproportionate share” of Medicaid patients will leave Kentucky hospitals with $77 million less by 2021, KHA says. Medicare no longer allows such hospitals to mitigate what the industry calls the “Medicaid shortfall,” the difference between what Medicaid pays and the actual cost of care.

Medicaid has its own disproportionate-share program. Its proposed cuts would reduce Kentucky’s payments in 2021 to $60 million, 75% less than the 2018 total of $227 million, KHA says. Those cuts have been put on hold until Nov. 21, and hospitals are still hoping to prevent or mitigate them.

Also of concern is a “site-neutral” rule, finalized in November 2018 that allows Medicare to pay the same for an outpatient hospital clinic visit as it does to a traditional clinic for the same service. A federal judge blocked the rule last month, but the government could appeal. If the rule is reinstated, KHA says, it would cost Kentucky hospitals $563 million over the next 10 years.

Kentucky hospitals would also take a hit if the Centers for Medicare and Medicaid Services cuts a federal drug-discount program known as 340B. CMS has appealed a federal judge’s ruling that its Medicare 340B rate cuts for drugs purchased through the program was unlawful. KHA says such cuts would cost Kentucky hospitals $16 million a year.

The impact of federal reimbursement policies can be told in the story of Breckinridge Memorial Hospital in Hardinsburg, which was on the brink of closing, largely because of ongoing federal reimbursement cuts to Medicare and Medicaid, but was finally able to break even because it started participating in the 340B program.

Hospital officials recognized that its break-even status obtained from the 340B program was a short-term solution, but city officials said it was enough to thwart their request for a tax hike to shore up the hospitals empty savings account.

Rural hospital closures cost communities their immediate access to emergency and acute care, causing longer drive times to the nearest hospital and in some cases poorer health outcomes, especially in a traumatic event. A University of Kentucky study found that ambulance-run length for rural patients increased 76%, from 14.2 minutes to 25.1 minutes, when their hospital closes. For seniors that transport time was 98% longer, going from 13.9 minutes to 27.6 minutes.

Hospital closures can also bring economic hardship to a community, since hospitals tend to be large employers and support other businesses, like pharmacies and clinics. When the sole hospital in a community closes, per capita income declines by 4% and the unemployment rate rises 1.6% according to a study in the journal Health Services Research.

On top of that, not having a hospital can make it more difficult for a community to attract new employers or new health-care providers; hospital closures often results in the out-migration of existing providers and specialists.

Navigant determined that 10 of the 16 rural hospitals in Kentucky at high financial risk were essential to their communities, based on an analysis of trauma status, service to vulnerable populations, geographic isolation, and economic impact.

About 41% of Kentuckians live in rural areas, according to the Rural Health Information Hub.

Another suggestion is to stop requiring small rural hospitals to have inpatient beds in order to get Medicare reimbursement. DeBehnke said that would allow them to become “rural emergency hospitals,” with a well-functioning emergency department and an attached ambulatory clinic designed to meet local needs. This new designation would allow them to receive special help from Medicare.

One such proposal is the bipartisan Rural Emergency Acute Care Hospital (REACH) Act which has not gained much traction in Congress though it has been sponsored by Sen. Chuck Grassley of Iowa, the Republican who chairs the Senate Finance Committee. Navigant is proposing that states be able to do this on their own, through a waiver from CMS, DeBehnke said

Another suggestion is for rural hospitals to regionalize their care, which means they would divvy up functions among hospitals or agree to let certain hospitals specialize in certain types of care. Many already do this for perinatal care, the care given before and after the birth of a child.

DeBehnke said one model could have four hospitals in a region each be responsible for one area of care. One would do inpatient care, another would be a free-standing emergency room with a robust clinic, another would provide long-term care, and another would provide behavioral-health and addiction-recovery care. He said that may sound really good to some, but is a hard sell because communities and their hospitals are reluctant to give up services.

“There’s a balance between keeping some resource in that community that are health-care related or losing the facility altogether because of the financial stresses,” DeBehnke said. “So we think that regionalization is a really good opportunity to stabilize rural healthcare.”

It’s also important for these facilities to be “really, really laser-focused on cost and cost structure,” he said.

DeBehnke said there needs to be a shift away from only thinking about how to save rural hospitals to one that looks at the bigger picture, which considers the real health-care needs of rural communities and what kind of facilities and services they require.

“It’s a multi-factorial problem that actually is nuanced, related to the local community and the region in which health care is provided, and the solutions will have to be tailored accordingly. There’s not going to be a single fix,” DeBehnke said. “It’s a heavy lift, mostly from a cultural standpoint and from an emotional standpoint related to those communities.”

State Sen. Stephen Meredith, R-Leitchfield, has filed three bills for the upcoming legislative session to help rural health providers. They would remove all requirements for Medicaid co-payments; require more equitable payments between urban and rural providers from managed-care organizations, which care for most Kentucky Medicaid members; and reduce administrative burdens on providers by decreasing the number of MCOs to three from the current five.

Meredith said the bills would only help rural hospitals, not save them.

“The only thing that is going to save rural hospitals is a fundamental change in the health-care delivery system,” he said. “But reduced administrative costs associated with providing health care, every dollar we can put back into the care of patients versus the paperwork, that would be a benefit.”

A former hospital administrator, Meredith said some rural hospitals have “a margin of 0.5% to 1%, that’s nothing,” and that could disappear if a doctor gets sick and is unable to practice “for an extended period of time.”

The Kentucky Hospital Association says it also is “very concerned about the ongoing financial viability of rural hospitals,” and is working to improve policies to help them. KHA said it changed the distribution methodology of the Medicaid disproportionate-share payments so that hospitals with a higher-than-average number of Medicaid patients, including critical-access hospitals, get twice the amount from the payment pool than they would have otherwise.

KHA said it is working with the state to implement a new Medicaid Hospital Rate Improvement Plan that would generate $100 million in additional reimbursement in the current state fiscal year. The money would make up the difference between what Medicaid actually pays and the actual cost of care. KHA says Medicaid pays 82% of the total cost of care. This would be accomplished through a provider tax, the revenue from which would be used to qualify for more federal funding.