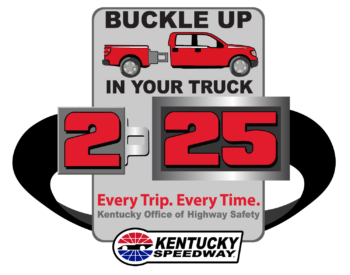 SPARTA, Ky. — Kentucky Transportation Cabinet (KYTC) will remain the title sponsor of the NASCAR Gander Outdoors Truck Series race at Kentucky Speedway. The speedway’s continued partnership with KYTC is centered on the “Buckle Up In Your Truck” (BUIYT) campaign to bring awareness to seatbelt use in pickup trucks.

The BUIYT 225 will kick off a NASCAR triple-header weekend on Thursday, July 9.

“The BUIYT 225 kicks off our huge triple-header weekend and I can’t think of a better partner to do that with than KYTC,” said Kentucky Speedway General Manager Mark Simendinger. “We have a long and treasured relationship, during which time we have held some great racing and saved many lives. We look forward to a lot more of both again this year.”

The Kentucky Office of Highway Safety’s BUIYT campaign, an aspect of safety within the Transportation Cabinet, works in conjunction with the “Click It or Ticket” program. Research has found that drivers and occupants of pickup trucks are less likely to use their safety belt than in any other type of vehicle.

By using the Gander Trucks race as a platform, the goal is to increase public awareness of the lack of safety belt use in pickup trucks, educate drivers to buckle up and diminish fatalities.

“We value the Kentucky Speedway’s partnership and commitment to help save lives on our roadways,” said Acting Executive Director Jason Siwula. “As we gear up for racing season, we’re proud to continue highlighting this critical highway safety issue and encourage NASCAR fans to make safe choices each and every time they get behind the wheel.”

Of the 724 fatalities on Kentucky roadways last year, 111 involved a pickup truck.

“Wearing a seat belt gives you the best chance to survive a crash, as it is your best defense against a speeding, distracted or drunken driver,” said Siwula. “NASCAR drivers always buckle up before starting their engines. We’re asking NASCAR fans to do the same.”

The 2020 season at Kentucky Speedway begins in July with the return of a NASCAR triple-header weekend anchored by the NASCAR Cup Series Quaker State 400 presented by Walmart on Saturday, July 11.The Gander Trucks Buckle Up In Your Truck 225 starts the weekend on Thursday, July 9 and the Xfinity Series Alsco 300 is Friday, July 10.

Tickets, Pre-Race Passes and campsites are on sa­­le at http://www.kentuckyspeedway.com, by calling (859) 578-2300 or visiting our speedway ticket offices at 1 Speedway Drive, Sparta, Kentucky 41086, just off Interstate Highway 71 Exit 57 and Kentucky Highway 35 N.