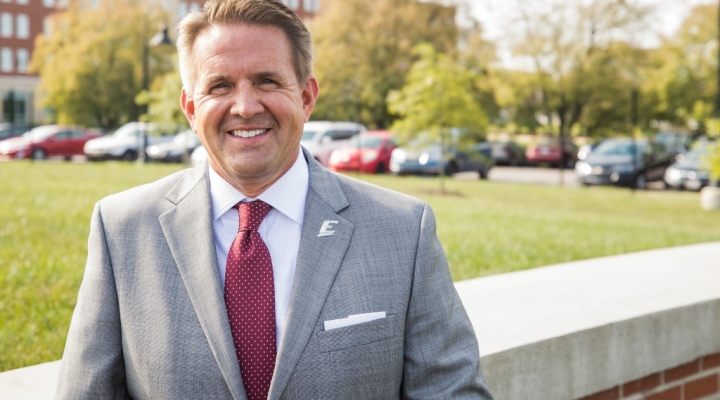 Currently in his seventh year of service, Dr. Michael T. Benson will step down as president of Eastern Kentucky University effective Jan. 6, 2020.

RICHMOND, Ky. — Currently in his seventh year of service, Dr. Michael T. Benson will step down as president of Eastern Kentucky University effective Jan. 6, 2020. Benson will work with EKU Board Chairman Lewis Diaz along with the board of regents and the President’s Council to ensure a smooth transition.

“It has been a singular privilege and honor to serve as EKU’s 13th president,” said Benson. “Thanks to the efforts of many people, much has been accomplished as we have collectively built upon the solid foundation we found since arriving in 2013. While this was a difficult decision, after conferring with family, colleagues and friends, I have decided the time is right for me to step down as president. Given our love of the university and community, I will fully lend my assistance and support to EKU and the next administration. Additionally, I intend to use the next year to research and write my book—the first time I’ve enjoyed an extended sabbatical in 25 years of working at public institutions—about the first president of Johns Hopkins University, Daniel Coit Gilman, which is under contract with Johns Hopkins University Press.”

Diaz said, “I thank President Benson for his years of service to EKU. The university is better in numerous ways because of his efforts and leadership. During the time that Dr. Benson has served as president, EKU experienced periods of peak enrollment, record levels of private support, improved retention and graduation rates and an ambitious campus revitalization initiative that modernized and enhanced EKU’s ability to serve its students. I wish the best for Dr. Benson and his family as they move on to the next chapter of their lives. I will work with the president to ensure that the transition is seamless as possible while keeping a laser focus on the success of EKU in serving students.”

Active in intercollegiate athletics on the national and conference level, Benson completed a four-year term as a member of the nine-person NCAA Honors Committee, the group charged with awarding the NCAA’s highest recognitions each year, the first president from a Kentucky institution to serve in this capacity. He is also a past chair of the Presidents’ Council for the Ohio Valley Conference and was recently elected as representative for the Ohio Valley Conference on the NCAA Division I Presidential Forum.

Benson has remained current in his scholarship as well, completing articles and monographs for various publications while teaching a course this semester on World War I within the Department of History. In Nov. 2018, Benson and his co-author, Hal R. Boyd, released College for the Commonwealth: A Case for Higher Education in American Democracy, published by the University Press of Kentucky 2018. Their work was recently nominated for the University of Louisville 2020 Grawemeyer Award in Education.

The university will begin transition planning immediately by establishing a search committee and coordinating a national search for the next president of EKU.