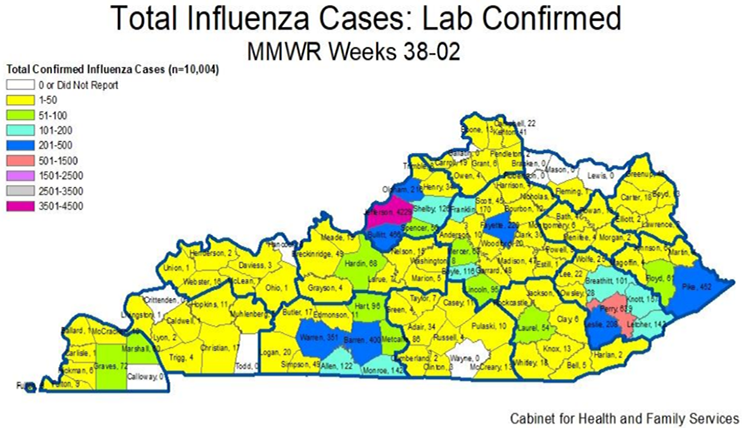 Influenza has killed 21 people in Kentucky this season, two under the age of 18, according to the state Department for Public Health.

The latest weekly report shows that the flu activity in the state has dropped a bit in the first two weeks of the year, compared to the last two weeks of 2019, when the state was reporting more than 2,000 new cases each week.

In the week ending Jan. 11, the last week for which the state has issued a report, Kentucky had 1,898 new cases. During the flu season, which can last through May, 10,004 cases have been confirmed in Kentucky.

At the same time last year, Kentucky’s flu statistics were much less concerning; the state had 3,148 lab-confirmed cases and nine deaths, one of a minor.

The number of flu cases in Kentucky is higher than the confirmed number since the surveillance report only shows a sampling of cases throughout the state, and 10 of the state’s 120 county health departments did not report.

Because flu is not a disease that has to be reported, the state relies on reporting from “sentinel sites,” a network of doctors’ offices, hospitals and health departments that voluntarily submit their flu data, so the state does not track every case of flu in Kentucky, said Beth Fisher, a spokeswoman for the state Cabinet for Health and Family Services, said in an email.

A health department fact sheet says, “The sampling represents only a small percentage of influenza cases for the state, but contributes to the ongoing assessment of flu activity in Kentucky and helps determine the level of flu activity in the state each week.

So far, most of Kentucky’s cases have been in children between the ages of 1 and 10, likely because a strain of the virus called type B/Victoria has been the predominant virus this season, and children are highly vulnerable to it, according to the Centers for Disease Control and Prevention. The B/Victoria strain normally doesn’t show up until March or April.

The CDC says that in recent weeks, approximately equal number of type B/Victoria and type A (H1N1) viruses have been reported.

The health department’s Troi Cunningham urged Kentuckians to get a flu vaccine, which is the best defense against it. “It is not too late to get the flu shot,” she said in an e-mail. “Get it now. It takes two weeks for it to full take effect.”

The CDC says everyone over six months old should get a flu shot each year.

Cunningham particularly urged pregnant women to be diligent in getting their flu shot because the immunity is transmitted to their infant while the baby is still in the womb and can protect them at birth. “CDC research shows a child’s risk of dying from the flu can be reduced by 50 percent or more by getting the vaccine,” she said.

Four Eastern Kentucky schools canceled classes last week due to widespread illness. Wolfe, Owsley and Lawrence county schools were closed Jan. 15-17. Beth Musgrave reports for the Lexington Herald-Leader. Pike County schools were closed Friday, Jan. 16, Hazard’s WYMT-TV reports. Classes were scheduled to resume on Tuesday, Jan. 21, after the Martin Luther King Jr. holiday. The schools did not say what the illness was, but flu is widespread throughout the state.

On Jan. 16, acting in response to the flu, the University of Kentucky restricted visitation at its hospitals, including: no visitors under age 12; none under 18 in the bone-marrow transplant area; only two visitors per patient room at a time; no visitors with flu-like symptoms; and some visitors may be asked to wear a mask or other protective clothing while visiting.

Compassionate exceptions will be made case by casem and additional restrictions may be in place in some units, a UK HealthCare news release said.

Pike County continued to be among the hotspots for flu in the week ending Jan. 11, with 101 new cases, for a total of 452. Perry County, a major hotspot this season, had 44 more cases during the week, for a total of 639. Adjoining and less populous Leslie County added 25 for a total of 208. Warren added 84 and Barren 58, for respective totals of 351 and 400.