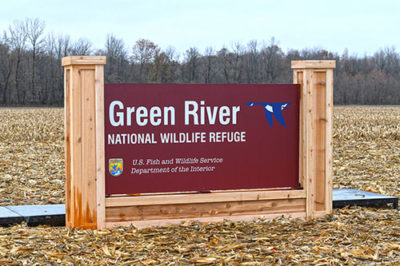 Also in November, McConnell and then Gov.-elect Beshear discussed the use of federal “Duck Stamp” funding, which could support land acquisition from willing property sellers to expand the refuge. Beshear has since approved the measure, so that “Duck Stamp” funding can be utilized for these purposes.

“We are thankful for Leader McConnell’s support of the Green River National Wildlife Refuge. Together, we are showing our commitment to long-term conservation and expanding access to our natural wonders in Western Kentucky,” said Beshear. “I fully support growing Kentucky’s cherished wildlife-related recreation, which significantly contributes to our local economies and provides our families with more opportunities to fish, boat, hunt and watch wildlife. We also appreciate state and federal fish and wildlife services for their contributions to helping us assemble the vast refuge.”

“I’m grateful Governor Beshear answered the call to protect Western Kentucky’s outdoor heritage at the Green River National Wildlife Refuge,” said McConnell. “For years, I worked with local, state and federal partners to establish this refuge, and I’m proud of the enormous support we received from the Henderson community. Together, we’re preserving our commonwealth’s wildlife habitats and providing new opportunities for hunting, fishing and other outdoor recreation. With the Governor’s decision to take advantage of these federal resources, the Green River National Wildlife Refuge can grow to continue fulfilling its mission. Across the nation, refuges like this one have drawn new visitors and their dollars into local communities. I’m proud to partner with Governor Beshear as we conserve Kentucky’s natural beauty and our pastimes, and I look forward to further collaboration as we advance our commonwealth’s priorities.”

In 2018, McConnell secured a legislative measure directing the U.S. Department of the Interior to establish the new refuge in Henderson. As a senior member of the Senate Appropriations Committee, McConnell shepherded his measure to passage and into law. In 2019, he also secured a provision directing the U.S. Fish and Wildlife Service to remove regulatory barriers to expedite the establishment of the refuge.