ERLANGER, Ky. — The U.S. Department of Transportation released its average airfare ranking report for third quarter 2019, and the Cincinnati/Northern Kentucky International Airport (CVG) once again has the lowest airfares in the region. Among the top 100 U.S. domestic airports, CVG ranked no. 80 with an average fare of $314; 9% below the national average of $345.

Four air carriers at CVG added nine new flights in 2019. These flight additions, increased capacity and competition among all airlines contribute to lower airfares, which contribute to the record local passenger growth taking place at CVG. The airport set monthly local passenger records 11 of the 12 months in 2019, with a new all-time record for local passengers set in June 2019 with 426,246 passengers served. Over the course of the year, CVG served more than 9.1 million passengers. 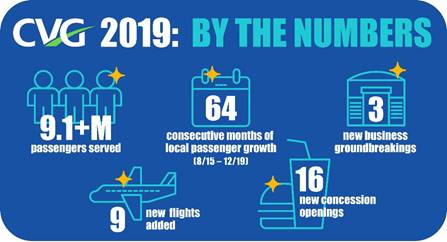