Home » Too much power and big spending 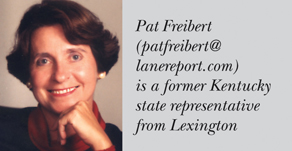 Recently, ABC news anchorman Charles Gibson featured a segment on the use and misuse of so-called federal stimulus funds. The story showcased stimulus funds used for the Johnstown/Cambria County Airport in the congressional district of Pennsylvania Rep. John Murtha.

The problem is that this airport has only three flights leaving daily, all to Washington, D.C. On average, fewer than 20 passengers a day flew out of this airport in 2008. Government subsidy equals $100 for every passenger.

While Rep. Murtha is one of the top four congressional members in spending tax dollars in his district, he is by no means an exception. Despite historic growth in federal spending, taxes and extraordinary deficits, and despite the bankrupt condition of Medicare, Medicaid and Social Security, members of Congress continue to throw massive sums of tax money at special projects “back home” or in operating costs of Congress.

Its members have proposed an additional $1.3 billion from the stimulus bill for its own operations. If approved, Congress will spend $4.4 billion on its own operations, an 11 percent increase to run its offices.

In August, Congress proposed $550 million for its own aircraft. After public protest, this proposal was withdrawn. Will it quietly resurface at a later date?
Although the welfare state has been on the march – the biggest expansion of entitlements in 40 years, a near doubling of the national debt and an increase in federal spending of more than a trillion dollars – limited-government advocates are beginning to take on the “economic stimulus” spending. Their success will determine the degree of liberty we preserve in America. Throwing money at problems is an obsolete and failed approach.

The more powerful the central government, the less power possessed by individual citizens. Big government, not capitalism, caused the blows to the free market economy months back. The crisis was caused by the Federal Reserve, Fannie Mae, Freddie Mac, and The Community Reinvestment Act, not the free market.

The Treasury secretary told us every Monday morning what he and the Fed chairman had done over the weekend, using bail-out money for something other than what he asked Congress to authorize. Treasury and the Fed lent directly to non-financial companies, partially nationalized major banks, and authorized the auto bailout in direct defiance of a Congressional vote. These were announced as “done deals,” with no time to fight these measures.

Big government causes massive problems like this and then demands more money and power to fix them – such as taking control of the financial, energy, healthcare, automobile and information industries. American business owners know how to run business; bureaucrats in Washington do not.

To achieve fiduciary stability for America, the country needs strong leaders, not just officials who react to the crisis of the moment. Whether it is excessive spending on pet projects, excessive federal taxation or unnecessary government intrusion into capitalist endeavors, the nation truly requires enlightened leadership right now.

We need a modern-day Thomas Jefferson or James Madison espousing limited government. We need an economist, such as the late Milton Friedman, the University of Chicago economist and recipient of the Nobel Memorial Prize for economic science, guiding our direction on curbing taxes, government spending and oppressive government regulations. Friedman would probably also tell us that it is unconscionable that the U.S. has given $54 million to ACORN (the Association of Community Organizations for Reform Now) since 1984, an organization under multiple investigations for corruption in several states.