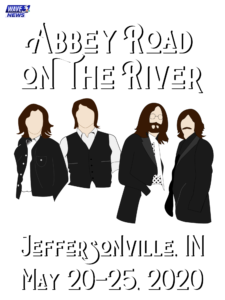 JEFFERSONVILLE, Ind. — The Wave 3 News Abbey Road on the River, the world’s largest Beatles-inspired music festival, will once again be held Memorial Day weekend, May 21-25, 2020 in Jeffersonville, Indiana. The five-day event is filled with the peace, love and music of the 60s and 70s, featuring more than 50 bands from around the world performing over 200 concerts.

The legendary rock group Little River Band, who was dubbed “the best singing band in the world” by The Eagles’ founding member Glenn Frey, will perform on Friday, May 22 at 7:30 p.m. Through the ‘70s and ‘80s, LRB enjoyed huge chart success with multiplatinum albums and a string of hits such as “Reminiscing,” “Cool Change,” “Lonesome Loser,” “The Night Owls,” “Take It Easy On Me,” and “Help Is on Its Way”. With worldwide album and CD sales of more than 30 million copies, they were the first band to set a record for having Top 10 hits for six consecutive years.

Tommy James and The Shondells will also headline the event, performing hits like “Crystal Blue Persuasion,” “Crimson & Clover,” “Mony Mony,” “I Think We’re Alone Now,” “Hanky Panky,” “Sweet Cherry Wine,” “Draggin’ the Line,” and “Mirage”. With 32 Billboard Hot 100 Chart Hits, 23 Gold Singles, and 9 Platinum albums, Tommy has sold over 100 million records sold worldwide. His music is featured in over 60 films and 53 tv shows to date. His autobiography Me, The Mob and The Music, listed on Rolling Stone’s top 25 music memoirs, is now in production. Tommy is now enjoying success with his radio show on Sirius/XM “Gettin Together with Tommy James” on 60s on 6 Channel. Tommy and the Shondells will perform on Saturday, May 23 at 8:15pm.

The line-up also includes Grammy winner and former lead guitarist for Wings, Laurence Juber, and The Cyrkle, the band who opened for The Beatles during this 1966 US Tour and whose hits include “Red Rubber Ball” and “Turn Down Day.”

The schedule features over 200 concerts highlighting The Beatles’ legendary music as a band and as solo artists. There will be several album shows where their signature albums are covered in their entirety, and multiple concerts will be held on Sunday, May 24 honoring John Lennon and what would be his 80th birthday this year.

Festivities take place at the Big Four Station Park, and will include Beatles merchandise, craft vendors, interactive art installations, food and bar services, and a playground area/ activity tent for children. Some concerts and events will be held in the Radisson Hotel.

To purchase tickets, make a hotel reservation, or get more information, visit www.arotr.com.