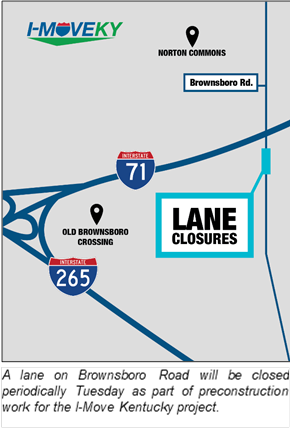 LOUISVILLE, Ky. — Contractors for the Kentucky Transportation Cabinet’s I-Move Kentucky project will close lanes on Brownsboro Road near Norton Commons Tuesday as they perform utility work in preparation for construction in the area.

A crew will be working on Brownsboro Road (KY 1694), just south of the point it crosses Interstate 71, and will close a single lane to traffic while work is underway. Work will be completed between 9 a.m. and 3 p.m., and drivers should be cautious when traveling in the area. Signage and flaggers will be in place to alert drivers of the lane closures.

The utility work is underway to prepare for replacement of the KY 1694 bridge over I-71 later this year at part of the I-Move Kentucky project. The bridge is being widened to accommodate the eventual widening of I-71.

I-Move Kentucky is the largest construction project in Kentucky since the Ohio River Bridges Project was completed in 2016. The four-year project will add lane capacity on I-71 and I-265 and include improvements at two, major interchanges where I-265 converges with I-71 and I-64.

Clearing and site preparation work also are underway on the project, primarily along the I-71 corridor between I-265 and KY 329 in Oldham County. Initial construction work on the I-Move project is expected to begin in four to six weeks, starting along I-71.

No timetable has been set to start construction along I-265. The entire I-Move project is scheduled to be completed by the end of 2023.