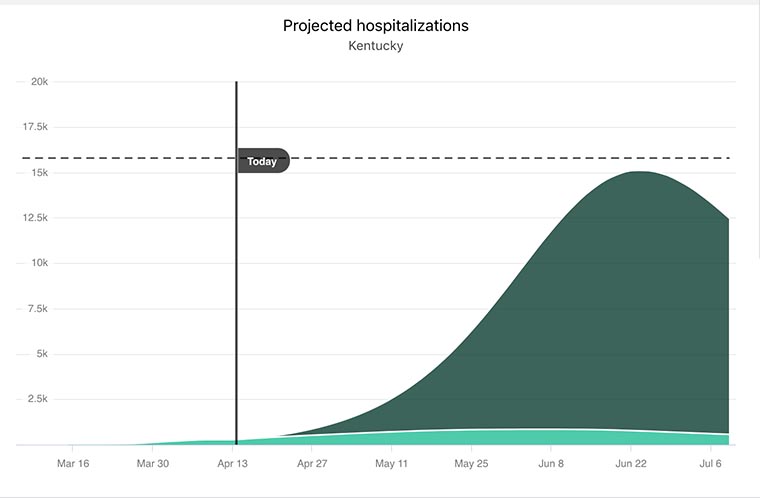 Projections of COVID-19’s impact on Kentucky continue to vary, but one model has begun to estimate how individual counties will deal with the disease.

Those projections rely on data that is even more scant than the earlier models, but they are being updated frequently and are intended to be a guide to local and state officials in planning for the expected surge of COVID-19 patients.

Statewide, that surge is expected to peak on April 24, according to the latest projection by the Institute for Health Metrics and Evaluation at the University of Washington. That is during the period that IHME predicts to be the peak for deaths, April 23-27, with 28 deaths per day.

The IHME projection of total deaths, which is based on patterns of deaths in other locations, has fluctuated widely. Its latest projection is that 933 Kentuckians will die of COVID-19, about half the 1,750 it predicted a week earlier, but about the same number it projected a week before that. When it estimated the higher figure, it projected 54 deaths per day at the peak, with approximately the same dates for the peak.

The model predicts that Kentucky’s health system is likely to have enough hospital beds, intensive-care beds and ventilators to handle the surge, but its projections have a wide range of possibilities, many of them exceeding capacity. Its projections are based on the assumption that social-distancing rules now in place will remain through May.

Another model, which Gov. Andy Beshear has used in simplified form at his daily briefings, projects a much later peak of stress on Kentucky hospitals, and a lower number of hospitalizations: 841, on June 7, if there is strict compliance with social-distancing rules. If there is poor compliance, it estimates a peak of 15,105 hospitalizations on June 23. That would be near system capacity, but the state is working on temporary field hospitals and other measures to increase capacity.

The model, developed and updated by a group of epidemiologists across the country branded as CovidActNow, projects that with strict compliance, 2,000 Kentuckians would die of COVID-19, and that with poor compliance, 16,000 would die. The latter number is 3,000 higher than it was a week ago.

The model has begun to project the county-by-county impact of COVID-19, based on limited data. Below is an enlargement of its national map, focused on Kentucky, along with the map legend. The colors are based on poor compliance; most counties at high or moderate in that case are in a lower category under strict compliance. The model has, for each county, bell-curve charts like the one above. 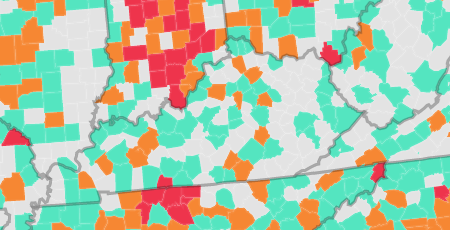 Kentucky Health News is a service of the Institute for Rural Journalism and Community Issues, based in the School of Journalism and Telecommunications at the University of Kentucky, with support from the Foundation for a Healthy Kentucky.