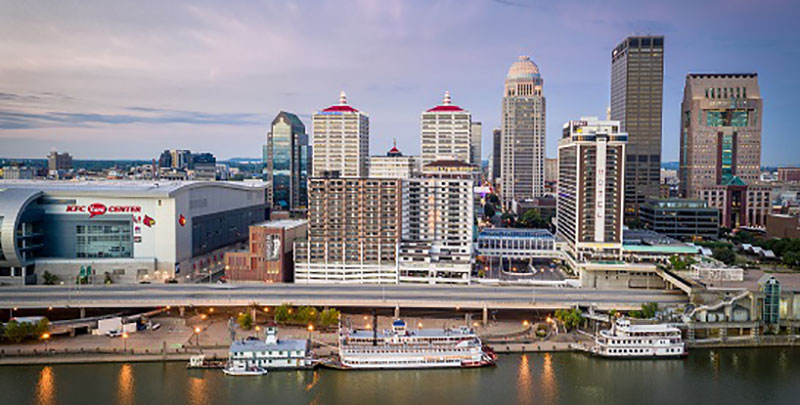 LOUISVILLE, Ky. — Louisville Mayor Greg Fischer said Monday that a new study on the effectiveness of social distancing shows that the stringent measures being used in Louisville to slow the spread of COVID-19 are working.

As other states rush to reopen their economies, the mayor said the modeling study performed by health experts from the University of Louisville and Louisville Metro Government offers a stern warning about the danger of moving too fast.

“Since the beginning of the COVID-19 crisis we’ve been stressing the need for social distancing, which starts by staying home whenever possible. And now that we’ve been putting these ideas into practice for almost two months, we have new evidence that those measures are working, and saving lives,” Fischer said.

“Projecting the COVID-19 Weekly Deaths, Infections, and Hospitalizations for Jefferson County, Kentucky” is co-authored by Dr. Seyed Karimi, an assistant professor in the Department of Health Management and System Sciences at the UofL School of Public Health and Information Science; and Dr. Sarah Moyer, Louisville Metro Chief Health Strategist.

Karimi and Moyer concluded that that the city’s decision to shut down large gatherings, close non-essential businesses, and tell people to stay home as much as possible gave the local healthcare system and emergency management officials a chance to build up capacity and keep a wave of coronavirus patients from swamping hospitals and first responders.

But the study also modeled scenarios in which those measures are lifted before there is a sustained decline in new COVID-19 cases and deaths, and projected that as many as 900 more people in Louisville would die and about 2,000 more would be hospitalized by August. Although more than 100 people have died from the virus in Louisville, there has not yet been the exponential rise in deaths that many feared at the start of the outbreak.

“We know from our modeling that decreasing the current social distancing measures without increased efforts to test, isolate, and do contact tracing can move us to an unstable path with increased hospitalization and infection trends that could be catastrophic,” said Karimi, who also is a health economist with Metro Public Health & Wellness.

At the same time, the study offers a hopeful path forward for the community. By maintaining the strict social distancing strategy and enhancing COVID-19 testing/tracing/tracking capabilities, the community could be able to gradually reopen by early June, the model projects.

“This model validates the measures we have put in place to control the spread of COVID-19 in Louisville thus far,” Moyer said. “The study also serves as affirmation of our state and local efforts to slowly release restrictions.”

Fischer has previously announced plans to expand the city’s ability to test for the virus and utilize “contact tracing” to isolate people who may have been exposed, but warned that the effort will be massively expensive and would require federal assistance to properly build and staff. The Public Health & Wellness Communicable Illness Team currently has 55 members but would need to grow considerably in order to truly contain the spread of COVID-19.

“This study gives us important guidance on how we can more safely reopen in the coming weeks – which starts with maintaining our current social distancing measures, and adding even stronger containment measures, like expanded testing and contact tracing,” the Mayor said.

Read the study at www.louisville.edu/sphis/documents-and-pdfs/JCCOVID19PredictionWeek1Report5120distribution.pdf

Mayor urges people to avoid traveling to and from Indiana

Fischer also said that Louisvillians should continue to avoid unnecessary trips to Indiana despite that state’s decision to begin reopening some of its non-essential businesses.

“We need to proceed with caution as we look to lift restrictions and rebuild our economy.

This is not a situation where we want to be first to reopen. Being first equals taking the greatest risk,” the Mayor said. “Indiana is on a different timeline, but the virus is still out there. It’s not worth risking you or a loved one’s life to go across the river just because a restaurant or a salon might be open sooner.”

Last week, Fischer extended Louisville’s COVID-19 state of emergency – first issued on March 13 – until June 1. Although the community has so far prevented the virus from overwhelming local hospitals, Louisville is still very much in the throes a pandemic.

The mayor said he has spoken with leaders in Southern Indiana about the need for a regional plan to reopen the local economy, and urged Indiana Gov. Eric Holcomb to allow counties along the Kentucky border to work in closer coordination with Louisville. In the meantime, he asked residents on both sides of the river to avoid crossing the bridges unless it’s for work, medical treatment, or to care for a loved one.

“We all have the same goal of safely getting back to work and school and a more normal version of daily life,” Fischer said. “Let’s keep working together so we can all achieve it together.”

Currently, 56 members of LMPD, Louisville Fire, Metro EMS, Metro Corrections and the Sheriff’s Office are off-duty due to COVID-19:

Metro Corrections inmate data for May 4:

Fischer thanked Supplies Over Seas for reaching $1 million in donations of personal protective equipment to local healthcare workers and others fighting the virus.

Supplies Over Seas (SOS) is a Louisville nonprofit organization that meets critical healthcare needs in medically impoverished communities around the world by collecting and distributing surplus medical supplies and equipment.

“Since the COVID-19 outbreak, they’ve retooled and are working to provide PPE here in our community,” the mayor said. “And they have donated more than $1 million worth of medical supplies to our frontline warriors.”

SOS has been providing PPE and equipment to local hospitals, home health agencies, emergency responders, nonprofits, Metro services, clinics in west Louisville and most recently has been focused on nursing homes.

“I am deeply proud of our small team who supported the decision to focus 100 percent on local needs. They knew diverting all of these supplies to donations from revenue programs would put the organization and their jobs at risk, but they knew it was the right thing to do,” said Supplies Overseas President and CEO Denise Sears. “Every member of our team, without hesitation, put others before themselves. I am blessed to work with such compassionate individuals.”

Although local hospitals and first responders have managed to maintain an adequate supply of PPE such as masks, gloves, and shields, more is always needed. If you or your organization has the capacity to donate or produce PPE, please contact Louisville Metro Government at [email protected].

Fischer will be joined by LMPD Chief Steve Conrad and Metro Chief of Public Services Amy Hess on Tuesday morning for a tele town hall on the topic of public safety amid the COVID-19 pandemic.

To participate, go to www.facebook.com/MayorGregFischer at 10 a.m. on Tuesday.

Mayor Fischer and Chief Equity Offcer Kendall Boyd will join Louisville Pride Foundation’s executive director Mike Slaton on Tuesday for a community conversation on how the city’s focus on resilience, equity, and compassion has helped during this pandemic

To watch/listen, go to www.Facebook.com/LouPrideFest at 1 p.m. on Tuesday.