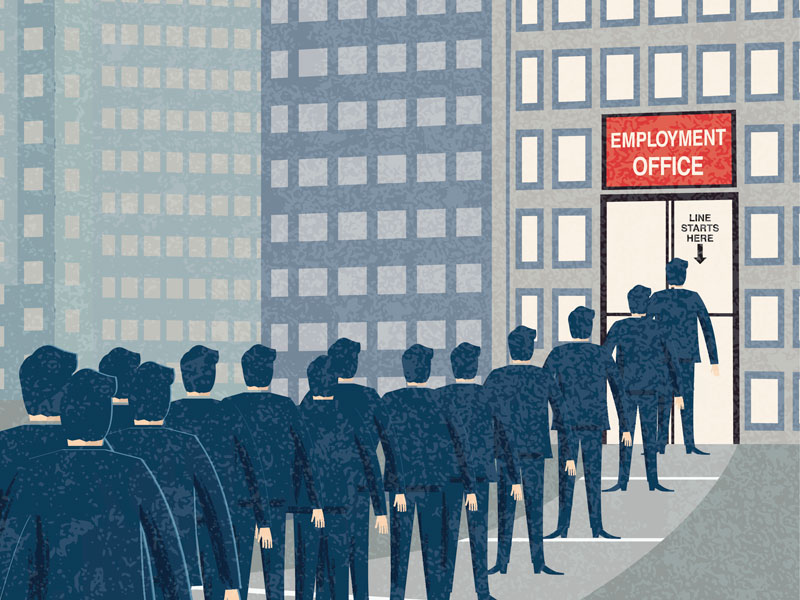 Total nonfarm payroll employment fell by 20.5 million in April, and the unemployment rate rose to 14.7 percent, the U.S. Bureau of Labor Statistics reported Friday. The changes in these measures reflect the effects of the coronavirus (COVID-19) pandemic and efforts to contain it. Employment fell sharply in all major industry sectors, with particularly heavy job losses in leisure and hospitality.

According to The New York Times, the monthly data underscores the speed and depth of the labor market’s collapse. In February, the unemployment rate was 3.5 percent, a half-century low. The only comparable period is the dawning of The Great Depression when unemployment reached about 25 percent in 1933, before the government began publishing official statistics.

In April, the unemployment rate increased by 10.3 percentage points to 14.7 percent. This is the highest rate and the largest over-the-month increase in the history of the series (seasonally adjusted data are available back to January 1948). The number of unemployed persons rose by 15.9 million to 23.1 million in April. The sharp increases in these measures reflect the effects of the coronavirus pandemic and efforts to contain it.

The number of unemployed persons who reported being on temporary layoff increased about ten-fold to 18.1 million in April. The number of permanent job losers increased by 544,000 to 2.0 million.

The labor force participation rate decreased by 2.5 percentage points over the month to 60.2 percent, the lowest rate since January 1973 (when it was 60.0 percent). Total employment, as measured by the household survey, fell by 22.4 million to 133.4 million. The employment-population ratio, at 51.3 percent, dropped by 8.7 percentage points over the month. This is the lowest rate and largest over-the-month decline in the history of the series (seasonally adjusted data are available back to January 1948).

The number of persons not in the labor force who currently want a job, at 9.9 million, nearly doubled in April. These individuals were not counted as unemployed because they were not actively looking for work during the last 4 weeks or were unavailable to take a job.

Persons marginally attached to the labor force–a subset of persons not in the labor force who currently want a job — numbered 2.3 million in April, up by 855,000 over the month. These individuals were not in the labor force, wanted and were available for work, and had looked for a job sometime in the prior 12 months but had not looked for work in the 4 weeks preceding the survey. Discouraged workers, a subset of the marginally attached who believed that no jobs were available for them, numbered 574,000 in April, little changed from the previous month.

Total nonfarm payroll employment fell by 20.5 million in April, after declining by 870,000 in March. The April over-the-month decline is the largest in the history of the series and brought employment to its lowest level since February 2011 (the series dates back to 1939). Job losses in April were widespread, with the largest employment decline occurring in leisure and hospitality.

In April, employment in leisure and hospitality plummeted by 7.7 million, or 47 percent. Almost three-quarters of the decrease occurred in food services and drinking places (-5.5 million). Employment also fell in the arts, entertainment, and recreation industry (-1.3 million) and in the accommodation industry (-839,000).

Professional and business services shed 2.1 million jobs in April. Sharp losses occurred in temporary help services (-842,000) and in services to buildings and dwellings (-259,000).

Employment in the other services industry declined by 1.3 million in April, with nearly two-thirds of the decline occurring in personal and laundry services (-797,000).

Government employment dropped by 980,000 in April. Employment in local government was down by 801,000, in part reflecting school closures. Employment also declined in state government education (-176,000).

Employment in financial activities fell by 262,000 over the month, with the vast majority of the decline occurring in real estate and rental and leasing (-222,000).

Employment in information fell by 254,000 in April, driven by a decline in motion picture and sound recording industries (-217,000).

The change in total nonfarm payroll employment for February was revised down by 45,000 from +275,000 to +230,000, and the change for March was revised down by 169,000 from -701,000 to -870,000. With these revisions, employment changes in February and March combined were 214,000 lower than previously reported. (Monthly revisions result from additional reports received from businesses and government agencies since the last published estimates and from the recalculation of seasonal factors.)