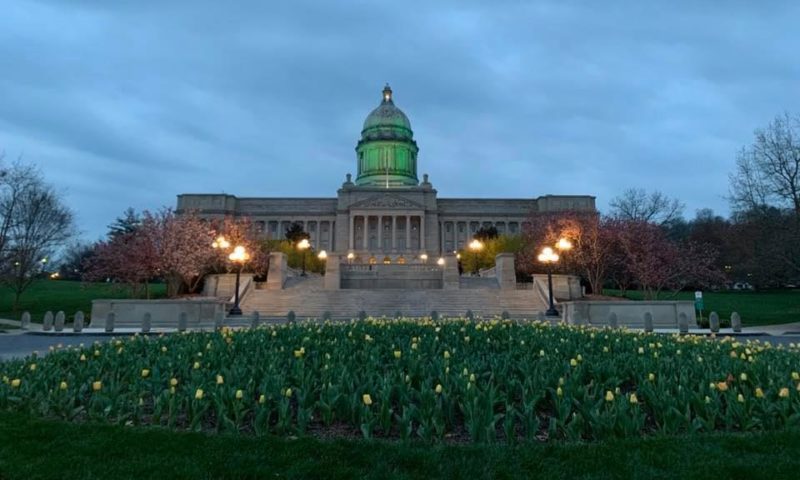 “As we move forward, we will be reducing our National Guard presence in Louisville,” the governor said. “That is a recommendation by our adjutant general that we will be following.”

Beshear talked about the search for justice for Breonna Taylor, a Louisville woman whose death touched off the protests there.

“Yesterday, I met with Breonna Taylor’s mother before she came up here. I sat and I listened. What I heard was a mother in pain. She wants justice and the truth. She deserves both,” the governor said. “Breonna’s death along with others across the country have led to thousands of people giving voice and a demand for truly equal treatment under the law and an end to injustices that permeate almost every part of our society.”

J. Michael Brown, secretary for the Governor’s Executive Cabinet, spoke about the state of the investigation.

“I can tell you very preliminarily the first results of an autopsy seem to indicate that Mr. McAtee succumbed to a single – we believe – a single gunshot wound to the chest, but tests on bullet fragments will have to be conducted at the Kentucky State Police crime lab to see if we can determine what exactly type of bullet he was struck by,” Brown said. “At this time we do not know that. We do believe it was a single bullet.”

“It is our belief at this time that approximately 18 shots were fired between the Kentucky National Guard and the Louisville Metro Police that evening. Those weapons are also in our custody for further testing, and they will be tested for DNA and any other things we can get from them,” he added.

Brown said that the goal is to get all the facts, get them quickly and be able to present, as much as possible, a clear determination of what happened shortly after midnight on June 1.

Beshear pledged to continue to listen and to take action.

“I hope later this week we are going to announce some of our initial plans about trying to get with leaders in the African-American community and the actual providers – hospital systems, Medicaid, insurers, all in the same room together. Not to have a task force or a study but to see how we can actually get this done. How we can actually make change in the health of individuals,” the governor said. “Just like in many ways it shouldn’t have had to take some terrible incidents around our country to wake people up or to get them to listen to the type of injustices that are occurring in our society, it shouldn’t take a one-in-every-100-year pandemic for us to see the same in health care.”

Case information
As of 4 p.m. June 2, Beshear said there were at least 10,185 coronavirus cases in Kentucky, 155 of which were newly confirmed Tuesday.

“Let’s keep lighting our homes up green,” the governor said. “Let’s continue to ring our bells at 10 a.m. Let’s do it for those that we’ve lost from this and from senseless violence. Everybody that we’ve lost should still be here and deserves that same level of compassion.”

At least 3,275 Kentuckians have recovered from the virus. For additional information, including up-to-date lists of positive cases and deaths, as well as breakdowns of coronavirus infections by county, race and ethnicity, click here.

In four federal court cases, plaintiffs – including Kentucky Attorney General Daniel Cameron – argued that Kentucky’s executive order on mass gatherings, which prohibited people from congregating in groups, was unconstitutional. Beshear and officials with the Kentucky Cabinet for Health and Family Services insisted that the restrictions were both legal and necessary to prevent the spread of COVID-19.

Late Friday, the U.S. Supreme Court issued an order agreeing with Beshear and confirming that the order limiting mass gatherings did not violate the Constitution.

“Where those broad limits are not exceeded, they should not be subject to second-guessing by an ‘unelected federal judiciary,’ which lacks the background, competence, and expertise to assess public health and is not accountable to the people,” Roberts wrote in his opinion.

The Governor’s Office of General Counsel is making the various federal courts aware of the Supreme Court’s decisive opinion, which should resolve all current cases challenging the Governor’s orders.

Testing expansion
Beshear continues to urge Kentuckians to get tested for COVID-19. For information on how to register at sites throughout the commonwealth visit kycovid19.ky.gov.

“I know we are now in the upper half of states for the total number of tests that have been run, and that’s an incredible story, given where we started,” the governor said about ongoing testing efforts.

Absentee Ballot Application Portal online
Beshear is encouraging all voters to use a new Absentee Ballot Application Portal now available online. A link to the State Board of Elections’ portal can be found at govoteky.com. He urged everyone who plans to vote in next month’s primary elections to go to the portal and request an absentee mail-in ballot.