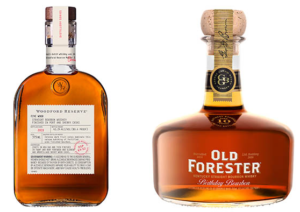 “This is the first time in Woodford Reserve’s history that we’ve blended whiskeys that have been finished in five different barrels,” said master distiller Chris Morris. “The result is a rich taste and a bright finish.”

The new whiskey is part of Woodford Reserve’s experimental Distillery Series, which highlights the brand’s “commitment to innovation and premium craftsmanship”. The brand releases three expressions annually as part of the range.

On 2 September, Old Forester will release the 20th iteration of its limited-edition Birthday Bourbon in celebration of founder George Garvin Brown’s birthday. This year also marks the 150th anniversary of Brown-Forman.

“Being part of the Birthday Bourbon selection process is one of my favorite parts of my job because of the legacy and tradition this expression represents,” said Jackie Zykan, Old Forester master taster. “We’re really proud of what we’ve produced this year and think it’s a great way to celebrate George’s birthday and Old Forester’s historic anniversary.”

The new expression is the third Birthday Bourbon to be bottled at the Old Forester Distilling Co in Louisville, Kentucky.

Campbell Brown, Old Forester president, said: “Its annual release has become something that Bourbon lovers anticipate, and we really believe that the 2020 version is one of our best yet.”

The nose of the whiskey has notes of white flora, magnolia, and citrus, spiced with vanilla, buttery leather, and cocoa powder. The palate offers caramel and brittle toffee and a tropical character that blooms into a banana, mango, coconut flakes, and macadamia nut.

The 2020 Old Forester Birthday Bourbon is priced at US$129.99 and available in “extremely limited quantities”.