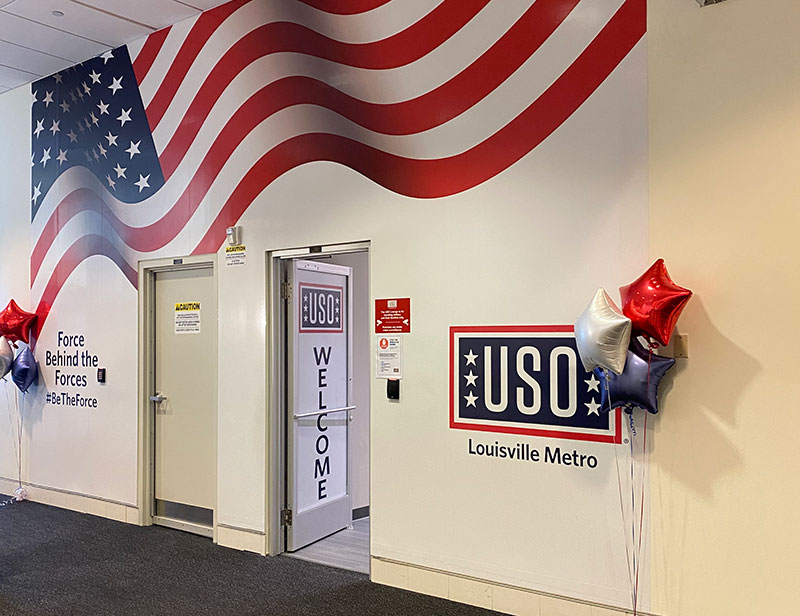 Here service members and their families will be able to enjoy some comforts from home while traveling, no matter where they are going. Amenities include complimentary snacks, TVs, video game systems, free WiFi and comfortable chairs — perfect for a quick nap. The new USO Louisville Metro Lounge is located before the security checkpoint, down the west hall from the TODAY store.

“I’m so pleased we now have an official USO location at SDF,” said Dan Mann, executive director of the Louisville Regional Airport Authority. “With our close proximity to Fort Knox and the numerous other military folks who come through our airport each year, I think it’s great they have a dedicated space to relax before or after their flights and with their families. I thank the USO for their partnership in making this happen.”

The new lounge will be open Mondays through Friday from 10 a.m. to 6 p.m., with the intent to expand its operations to seven-days-a-week with additional hours in the near future.

“We are excited to partner with the Louisville Airport to open our new USO lounge,” said Sherry Ems, executive director of the USO of Central and Southern Ohio. “With over 250 centers across the globe, this is one more place we can support our military and their families as they travel. We are also excited to be able to offer a little piece of home for our soldiers as they travel to and from Fort Knox. The support we have received from the airport has been amazing, and this beautiful new center is a testament to their commitment to our military and the USO.”

The USO provides support to the military community through hundreds of locations around the world. Approximately 30,000 service members and their families are expected to visit the USO Louisville Metro Lounge at SDF.

The addition of a USO Lounge at the Louisville Muhammad Ali International Airport is part of the SDF Next Project, which includes enhancing the customer experience for all travelers at the airport. In addition to the USO Louisville Metro Lounge, SDF Next includes improvements to the airport’s rental car and parking operations, mechanical upgrades such as moving walkways, escalators and elevators and construction of a new Airport Operations Center.

For more information about the Louisville Muhammad Ali International Airport, visit www.FlyLouisville.com. To learn more about the USO of Central and Southern Ohio, visit www.USOCSO.org.