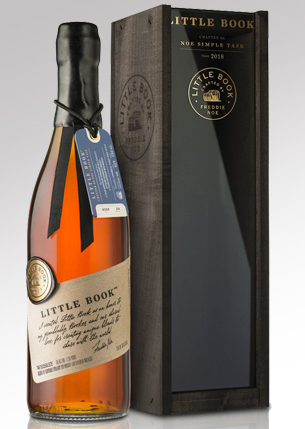 Like the previous chapters in the acclaimed Little Book Series, “Lessons Honored” continues to deliver on Noe’s passion for creating first-to-world, high-quality blended whiskeys, while also honoring the Beam family legacy. Noe’s inspiration comes to life in “Lessons Honored,” which features three uncut and unfiltered American whiskeys that bear a connection to his father, 7th Generation Beam Master Distiller Fred Noe, and the pair’s shared time working at the James B. Beam Distillery this past decade.

“This year’s release is an ode to my dad and the lessons he has passed down to me about bourbon and life, all of which I hope to pass down to my own children,” Freddie Noe said. “A lot of them go back to honesty and integrity. He taught me to be true to myself, which is something that’s very important in our family and to know when to slow down and be patient. Dad’s values carry over into our whiskey brands, and I’m proud to honor him with this special blend.”

“Going into the selection and blending process for this year’s release, I had a very clear idea of how I wanted to honor my dad and the story I wanted to tell with this whiskey,” Freddie Noe explained. “I knew right away these were the whiskeys I wanted to work with, so I spent most of my time perfecting the blend to balance the flavors to create a whiskey that would make Dad proud. I think I did just that – all the way down to the blue neck tag which represents our favorite sports team, the Kentucky Wildcats.”