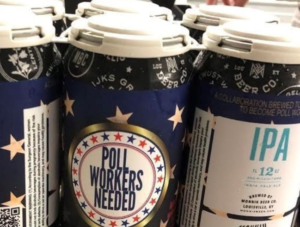 FRANKFORT, Ky. — Kentucky Secretary of State Michael Adams has come up with a creative way to recruit poll workers for the general election in November.

A normal election requires 15,000 poll workers in Kentucky, and during the primary, many voting precincts were unable to open because there were not enough poll workers to operate them. A majority of poll workers are senior citizens, who did not take part due to fears of the coronavirus.

In response, the Secretary of State’s Office formed a partnership with the Kentucky Guild of Brewers to help get the word out. The campaign, “SOS From Your SOS,” is now being carried by four Kentucky breweries.

Together they designed beer labels that solicit volunteers to work the polls and encourage Kentuckians to register to vote. The labels have QR codes directing people to GoVoteKY.com where they can register to vote and apply to be a poll worker.

“Last year I testified to the legislature that we had a poll worker crisis in Kentucky,” Adams said. “COVID-19 certainly hasn’t helped. We need younger generations to step up and be good citizens, and so we enlisted the help of Kentucky’s craft breweries to reach them.”

He said they put the idea together over the summer, designed the logo in house, and are grateful for the brewery partners for helping get the word out.

Adams says he got the idea from Ohio’s Secretary of State, Frank LaRose was the inspiration for this. “He had a similar initiative recently, where he partnered with craft breweries,” Adams said. “It was a great idea.”

He is taking it a step further, by using a message on the beer cans as a tool to register to vote. “You should have a huge increase in registrations in a Presidential year, but it’s hard to register voters right now. You don’t have the kind of drives that we’ve had historically. Usually, the two parties hold voter registration drives, on college campuses and elsewhere.”

Adams says the deadline to register to vote is Oct. 20., to be able to vote in the November election.

Charley Hamilton, the owner of Dreaming Creek Brewery, said he jumped at the chance to get involved.

“We, along with several other microbreweries around the Commonwealth, were eager to help support the initiative, by getting custom labels to help promote and make the information easily accessible through QR codes,” Hamilton said. “With COVID-19 still a strong concern going into the voting season, poll workers are in short supply. This initiative will hopefully bring attention to this and get some new folks to help out working the polls come voting time.”

He noted all registered voters can serve this year. “Ten percent of our voters aren’t Democrats or Republicans, and you can’t just write those people off. Under my agreement with Gov. Andy Beshear for June and November, you don’t have to be a Democrat or a Republican to be a poll worker. We’ll take anybody.”