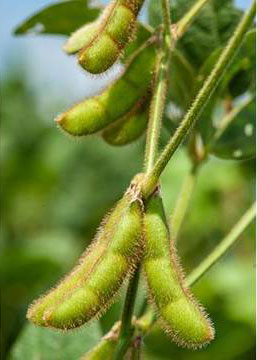 PRINCETON, Ky. — University of Kentucky researchers are studying the reasons behind an unexpected yield increase that appeared in a doctoral student’s soybean research.

Katherine Rod, UK doctoral student, was studying intensive management practices in double-crop soybeans under the advisement of Carrie Knott, UK grain crops specialist in the UK College of Agriculture, Food and Environment. Rod and Knott began noticing a three bushel per acre increase, on average, when foliar insecticides and fungicides were applied at the R3 growth stage. This yield increase occurred during each of the four years of Rod’s project at the UK Research and Education Center in Princeton.

While Rod’s project has ended, Knott has received funding from the Kentucky Soybean Promotion Board to determine the cause of the yield increase.

“A three bushel per acre increase is pretty substantial in double-crop soybeans,” said Knott, who is also the director of the UK Research and Education Center. “With many producers making a blanket foliar pesticide application based on a the crop’s growth stage, knowing the exact growth stage that can give them the best yields would be particularly beneficial for them.”

“Often we see huge yield differences between the two soil types, depending on the timing of our rainfall, so it will be interesting to see the results of this project,” Knott said.

Chad Lee, director of the UK Grain and Forage Center of Excellence, will have a research plot at Spindletop Research Farm in Lexington to see if the yield increase also occurs there. UK entomologist Raul Villanueva and plant pathologist Carl Bradley will also contribute their expertise to the study.