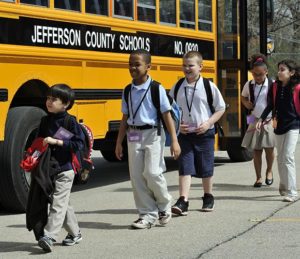 The Jefferson County Board of Education (JCBE) this month approved a resolution laying out its investment plans for the Future State of JCPS. The additional investments will become possible if voters approve a 7-cent increase in Louisville’s property tax rate in November.

“It is imperative that we as a community say in one voice that intentional investment in the future of our children is a top community priority,” said board Chairwoman Diane Porter. “We also believe taxpayers have a right to know how we plan to invest in our children if they approve this necessary increase.”

According to the resolution, if the increased property tax rate is approved, JCPS will invest approximately $54 million in fiscal year 2021-22:

According to the resolution, the Future State of JCPS seeks to “transform our students, our schools, and our city through strategic investment in the critical elements needed for all JCPS students to fulfill their academic, creative, and social potential.”

JCPS teachers and students would be able to work and learn in 21st century facilities, should the tax rate stand, and families would enjoy expanded school choice through an assignment plan that ensures greater learning. At the heart of it, the resolution notes, is recruiting, developing and retaining highly-effective teachers.

The JCBE approved the boost in the local property tax rate to 80.6 per $100 of assessed value in May, but it is subject to voter approval because the revenue generated would exceed a 4 percent increase.

JCPS’ property tax rate has been lower than nearby school districts including Fayette, Oldham, Frankfort, Nelson and Henry counties.