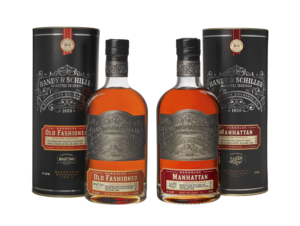 NEW ORLEANS, La.  — In the first year that The Fifty Best wine and spirits competition has held a ready-to-drink (RTD) cocktail tasting, both of the Handy & Schiller Barreled Cocktails claimed prestigious honors.

A panel of judges made up of wine and spirits journalists, spirits professionals, wine and spirit retailers, mixologists, spirits consultants, and connoisseurs blind-tasted the RTD cocktails and rated them individually on a five-point scale. After tallying the scores, medals were awarded based on the judges’ impressions.

These two barreled Cocktails are named for two people who had a great impact on the rich cocktail culture in New Orleans, Thomas Handy, and John Schiller. Schiller was a New York bartender who found his way to New Orleans and by 1860, began operating the world-famous Sazerac Coffeehouse in the French Quarter. Handy, originally from Maryland, worked for Schiller at the Sazerac Coffeehouse, and later went on to establish a successful importing and wholesale liquor business. Together, in New Orleans, these two people played a role in the early days of cocktail making that helped set the standard and inspiration for cocktails.