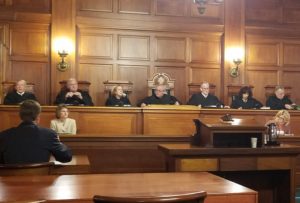 In a unanimous decision Thursday, the Kentucky Supreme Court ruled to uphold the power of Governor Andy Beshear to issue emergency executive orders amid the COVID-19 pandemic.

That authority was challenged earlier this year in a lawsuit filed by businesses in northern Kentucky, including the Florence Speedway and a child care center, who argued that mandated limits on crowd or class sizes and other restrictions threatened their solvency as businesses. Kentucky Attorney General Daniel Cameron also joined the suit challenging the governor’s power.

The Supreme Court’s brief said the governor’s orders were, and continue to be, necessary to slow the spread of COVID-19 and protect the health and safety of all Kentucky citizens.

“This type of highly contagious etiological hazard is precisely the type of emergency that requires a statewide response and properly serves as a basis for the governor’s actions under KRS Chapter 39A. Because the law and equities favor the governor in this matter, it was an abuse of discretion for the trial court to issue the temporary injunction,” the ruling said.

At a press conference later on Thursday, Beshear praised the Supreme Court for its ruling.

“The actions that my administration has taken are essential and an effective response to a type of virus that requires a comprehensive, statewide approach,” Beshear said. “Without them, we lose more people. It’s because of what was a stake – and not because of who is in the lawsuit – that I am grateful to the Supreme Court for this decision. This lawsuit and the position of the Attorney General would have eliminated every single safeguard we have in this state to keep you safe.”

“We have always maintained that the Governor should be able to enact policies that protect the health of citizens, but he must follow a process that allows for public input and respects the Constitution,” Attorney General Cameron said in a statement. “While the Court disagreed with our position, in this case, there are still lingering issues concerning KRS 39A and executive power that must be considered by the General Assembly in the upcoming legislative session.”