LOUISVILLE, Ky. — Paul Vernon Hornung, one of the all-time great college and pro football players from the 1950s and 60s, passed away Friday in his hometown of Louisville, Ky., at age 84, after a long battle with dementia.

Hornung is survived by his wife of 41 years, Angela Hornung. 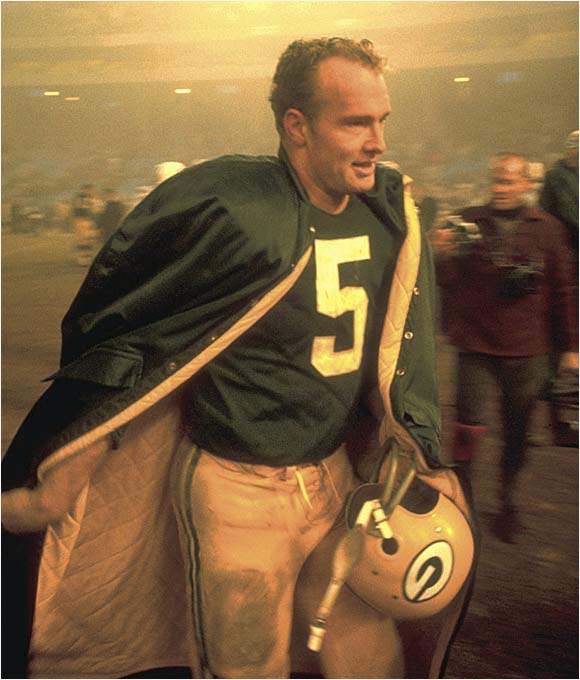 Legendary Green Bay Packer Football Coach Vince Lombardi once called Hornung “the most versatile man ever to play the game.” Nicknamed “The Golden Boy” because of his blond hair and handsome features, Hornung won the 1956 Heisman Trophy at Notre Dame as a quarterback, then was a star halfback and placekicker for the Green Bay Packers team that ruled the NFL in the 1960s. Hornung is a member of the college and pro football halls of fame and the namesake of the Paul Hornung Award, presented annually to the most versatile player in major college football.

The number one pick by the Green Bay Packers in the 1957 NFL Draft, Hornung became an all-pro halfback in the 1960s who could run, pass, catch, block and kick. The zenith of his colorful NFL tenure came during three exceptional seasons in 1959, 1960 and 1961 when Hornung led the NFL in scoring two of those years and finished second the other year by one point. In 1960, he capped by a stellar season when he scored a record 176 points in 12 games on 15 touchdowns, 15 field goals and 41 extra points – a mark that would stand for nearly 46 years.

He was the NFL’s MVP in 1961, and his Packers earned NFL titles in 1961, 1962 and 1965, and won Super Bowl I in 1967. Those years included a 1961 stretch in which Hornung was called to active duty in the Army to fulfill ROTC requirements from Notre Dame. He obtained weekend passes to play in Packers games, including the 37-0 rout of the New York Giants in the 1961 Championship in which he scored a record 19 points. Hornung scored the winning touchdown in the 1965 NFL championship game against the Cleveland Browns, and suited up for Super Bowl I, but did not play because of a neck injury. He was the first player selected by the New Orleans Saints in the 1967 expansion draft, but never played due to injury.

A two-time All-American at quarterback for Notre Dame, Hornung played every position in the backfield during his three-year varsity career with the Fighting Irish. A sequence of plays in a win over Iowa his junior year provided a glimpse of Hornung’s versatility and willingness to play any position on the football field to help his team succeed. With the Irish trailing 14-7 late in the game, he returned a kickoff into scoring position, threw a long touchdown pass, kicked the extra point, kicked off and made the tackle on the two yard line. Hornung played defense to hold Iowa, then drove the Irish down the field as the quarterback and kicked the winning field goal for the final 17-14 margin.

As a senior, Hornung led the Irish in passing, rushing, scoring, kickoff and punt returns, punting, field goal extra points, and passes broken up, and ranked second in interceptions and tackles. In 1956, although he and his Irish teammates won only two of 10 games, Hornung became the 22nd winner of the Heisman Trophy and remains the only player to win the coveted award in its 85 years while playing for a team with a losing record.

Hornung rose from humble beginnings in Louisville’s Portland neighborhood, where he was a three-sport star at Flaget High School. He then went on to attend Notre Dame at the suggestion of his mother and Sherrill Sipes, his best friend from high school who became his teammate with the Irish. To this day, Hornung and Sipes are the only two players from the same high school to start in the Notre Dame backfield at the same time. In 1956, Hornung graduated with a business degree and continues to be recognized as one of the top players in Notre Dame’s storied football history.

Upon retirement from football, Hornung resumed a successful real estate and investment career with hometown friend and mentor Frank Metts, and launched a career as a sports radio and TV commentator and speaker. He was a college and pro football analyst for CBS, TBS, ABC Radio; a color analyst on radio for the Minnesota Vikings and Notre Dame; and along with Lindsay Nelson, in 1966 did tape delay broadcasts of Notre Dame games that aired Sundays. Hornung has authored multiple books, including, “My Private Collection: The Paul Hornung Scrapbook” published in 2014; and “Lombardi and Me: Players, Coaches and Colleagues Talk about the Man and the Myth,” published in 2006.

Because of COVID-19 restrictions, there will be a private funeral mass at St. Louis Bertrand Church in Louisville followed by a private burial in Cave Hill Cemetery. Owen Funeral Home-Jeffersontown will oversee services. A public celebration of his life will be held at a later date. In lieu of flowers, the family requests donations be made to the Norton Sports Health Athletics and Learning Complex via the Louisville Urban League, 1535 West Broadway, Louisville, Ky., 40203; or the Sister Visitor Center via Catholic Charities of Louisville, 2911 South Fourth Street, Louisville, Ky., 40208.

UK audit reveals misuse of more than $250,000 in College of Education
Usually use the Brent Spence? Here are the detours