Kentucky Transportation Cabinet (KYTC) officials and the U.S. Coast Guard on Saturday reopened the Ohio River to navigational traffic around the fire-damaged Brent Spence Bridge, a major thoroughfare between Kentucky and Ohio. 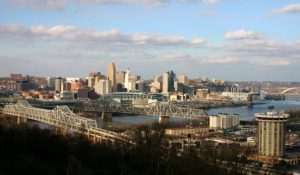 Efforts continue to repair and reopen the bridge, which which carries Interstates 71 and 75 across the river between Cincinnati and Covington. On Friday afternoon, engineers who had visually inspected a fire-damaged vertical steel component critical to support the bridge sent steel samples to a metallurgical laboratory in Louisville for microscopic analysis to ensure the metal was not compromised at a chemical level. The river was closed Friday night as a safety precaution until the metallurgical test was completed, said KYTC Secretary Jim Gray.

The lab testing, together with testing of the metal’s hardness that specialists conducted on site on Saturday, confirmed the components maintained their integrity, and therefore KYTC officials recommended to the Coast Guard that the river be reopened.

The bridge has been closed to motor vehicle traffic since a crash and intense fire involving two commercial motor vehicles early Wednesday morning. A team of some 20 inspectors and engineers began work Thursday to carefully examine and conduct testing on damaged elements of the bridge – both its steel superstructure and its concrete decking.

A video update from Secretary Gray, who has been on site, can be found here.

• The project is moving on multiple tracks at once: While inspectors examine the damage and collect samples for materials testing, engineers are designing specific repairs in real time.

• KYTC began work right away to secure the vendors, supplies and contractors that would be needed regardless of specific details of the eventual repair project.