Home » Turning the Corner on Cancer: Kentucky oncologists are encouraged by the impact of immunotherapies especially on lung cancer, a disease in which the state has the worst incidence rate in the nation. 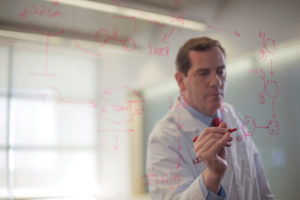 Cancer is a major killer of Americans, second only to cardiovascular disease. And sadly, Kentucky’s cancer portrait is even darker.

The Bluegrass State leads the nation in cancer incidence and deaths per 100,000 people, bleak statistics complicated by tobacco use and other unhealthy lifestyles.

Our hospitals have their work cut out for them and are rallying to overcome this disparity with strategies for increased access to services for prevention, early detection, and high-quality treatment.

For Kentucky’s cancer treatment centers, the present is a time of innovation and even transformation. As one oncologist said about an emerging treatment, “It wasn’t long ago we were saying it’s not hype, but it’s hope. Today it’s not hype, it’s reality.”

At the University of Louisville Brown Cancer Center, doctors are seeing improved cancer survival rates with the use of immune checkpoint inhibitors, a class of immunotherapy that the U.S. Food and Drug Administration (FDA) has approved for front-line lung cancer treatment.

The findings are especially encouraging since lung cancer accounts for the largest category of cancer-related deaths in the United States and Kentucky is a national leader in lung cancer deaths.

“When I started 20 years ago, lung cancer patients lived somewhere between six and 10 months,” said Dr. Jason Chesney,  director of the Brown Cancer Center. “You would see new patients and try to prolong their lives for a year or a half a year and try to maintain a high quality of life, but with the expectation that they were going to be dead by the end of the year.”

That is no longer the case.

“Today these immunotherapies are truly transformative,” Chesney said. “And it is truly transforming cancer from a disease that used to kill people within months to a chronic disease that’s not going to be very different from high blood pressure or diabetes in a few short years.”

After years of clinical trials, the oncologist said this class of immunotherapy drugs is really making headway.

“The big, exciting thing that’s happened is that we now have the ability to have a tumor agnostic approach to treating cancer, which is unheard of,” Chesney said. “For example, today you’ve got lung cancer, and you’re going to be seen by a lung cancer team.”

“Well, it turns out with immunotherapy that it doesn’t care where the origin of the cancer is so much—head and neck or melanoma or bladder,” he said. “What matters most is how many mutations it has. And now the FDA this summer for the first time ever approved a drug for the treatment of any type of cancer depending on how many mutations it has. The first ever tumor agnostic approval that can be used for any type of cancer.”

A cutting-edge therapy for lymphoma patients known as CAR-T is in clinical trials at Louisville’s Norton Cancer Institute.

“It’s an incredible advance in the world of oncology,” said Dr. Don Stevens, an oncologist with the Norton Cancer Institute. “With CAR-T therapy–and this is the exciting part–it seems like 50-60% of patients who otherwise would not have the hope of cure now have long-term disease control and possibly cure.”

In CAR-T therapy, patients donate their own T cells, a type of immune cell that is normally responsible for fighting infection. The cells are harvested using a process called pheresis, the same process donors undergo at a blood center when donating platelets.

The harvested T cells are then genetically engineered and processed so they then can be reintroduced into the patient to help fight their cancer.

“The treatment is one infusion, a single dose. Then we follow patients after that,” Dr. Stevens said. “That’s the reason we call it a living drug: Unlike a chemotherapy drug that can be out of your system in 24 hours, these cells can persist in patients for months.”

According to FDA guidelines, participants in the clinical trials are generally drawn from those who have failed to respond to first and then second courses of standard chemotherapy.

“The clinical trials have dealt mostly with lymphoma patients,” Stevens said, adding that the same technique could be used in pediatric leukemia or prostate cancer.

“The whole concept of cellular therapy is one that has been talked about and investigated for many years,” Stevens said. “This is not an overnight sensation, but we are excited to see it come to fruition.”

To meet the rising demand for cancer care, St. Elizabeth Healthcare opened its 250,000-s.f. cancer center in Edgewood to patients in October 2020. The Northern Kentucky facility has the ability to treat nearly 500 patients a day.

The Center for Precision Medicine and Genomic Health is a dedicated unit within the new facility that focuses on early detection, looking for genetic mishaps that might pose risks and running cutting-edge clinical trials.

“We have now been able to unravel the human genome to an extent that was previously impossible,” said Dr. Douglas Flora, executive director of oncology services for St. Elizabeth Healthcare. “It’s very common now that if you have an advanced lung cancer, we will send off sequencing of the (tumor) gene looking for the mutations that caused the growth.

“We are looking at treating even advanced lung cancer with targeted therapeutics that are more like smart bombs than the traditional bunker busters when we use chemo therapeutics,” Flora said. “It’s really a much more targeted, much more refined strategy exploiting weaknesses in the cancer’s defense system at the molecular level.”

This strategy was unknown 20 years ago.

“When I was a trainee in the early 2000s, all lung cancer or colon cancer patients were essentially treated with the same chemotherapy,” Flora said. “It was a very broad brush stroke. Now I have a much better picture of my adversary, and I can design a much more intelligent strategy to attack it than I previously could, and with amazing results compared to what we used to be able to do.”

At St. Joseph Hospital in Lexington, doctors are using PD1 inhibitors, a type of immune therapy that allows the immune system to recognize and destroy cancer cells.

Many patients qualify for the immune therapy as a front-line treatment.

“That means they don’t have hair loss and they don’t have much nausea compared to traditional chemo-therapy,” Dr. Croley said. “Less than 10% of patients have serious complications on immune therapy, so they are a much more effective and less toxic option.”

Many patients are benefitting from St. Joseph Hospital’s recent partnership with the Cleveland Clinic, which is consistently ranked as one of the nation’s top cancer hospitals by U.S. News and World Report.

“It’s probably the most exciting addition to our cancer program,” Croley said. “If patients have challenging cases or simply want a second opinion, we’re able to present the case, both the pathology to look at the slides and the cancer diagnosis, as well as all the imaging. We get that high level of expertise, and it’s really had a remarkable impact here.”

Managing Medicaid: 2020 has been a year full of changes for Kentucky Medicaid providers

Stronger Together: Information sharing among 50-hospital Kentucky Health Collaborative improves care and cuts costs
Taking on Lung Cancer in Kentucky: In a year brimming with bad news, there is some good news to report regarding lung cancer trends.