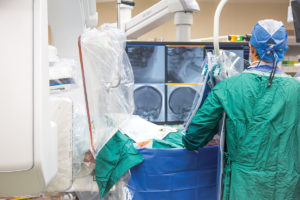 Advances in medical imaging are improving the vital early diagnostic process that saves thousands of lives in Kentucky every year.

Ultrasound, MRIs and CT scans provide radiologists with the data to diagnose a wide range of diseases from fatty livers and varicose veins to cancer and stroke. Lately, artificial intelligence has become part of the toolbox as well.

The developing fields of interventional radiology and theranostics are coupling unique treatment opportunities with imaging and blurring the lines between specialties.

Here’s a look at how Kentucky’s top hospitals are using the latest imaging technology to detect disease earlier, improve patient care and save lives.

One of the most advanced interventional medical imaging systems available, biplane technology uses two cameras rotating simultaneously on each side of the patient. The combined result is enhanced 2D and 3D image quality, which then shortens time between diagnosis and treatment, and allows lower but more precise radiation doses with less effect on adjoining tissue. Systems incorporate artificial intelligence to make recommendations to the treating doctor about appropriate stent sizes.

“This machine is the pinnacle of what is currently available in brain imaging,” said Dr. Tom L. Yao, an endovascular neurosurgeon with Norton Neuroscience Institute. “It has literally just come out, and the (image) reconstruction ability of the machine is faster and better than ever before.”

The scanning technology received approval from the U.S. Food and Drug Administration (FDA) in 2020 and is new to the market. Norton Brownsboro is only the eighth hospital in the country to invest in the equipment and the only hospital to have two installed in hybrid rooms equipped for both diagnostics and surgery assisted by live imaging.

Similar types of machines typically would be set up in a separate catheterization laboratory, rather than a hybrid room.

“What we’ve done is put this in an operating room where we can turn the bed to open (access to) the head up and do what we need to do,” Yao said. “And then cover the head and swing the bed back over to the X-ray system and immediately take X-rays to show what’s going on.”

“The advantage is, of course, that with everything in the same room everything is much faster versus moving the patient to a completely different section of the operating room or even a different building.”

Doctors can perform interventional procedures with increased confidence—treating a clot or bleed via an artery in the leg or wrist, or even opening up the skull.

“Being able to do both types of procedures in the same room gives us a big advantage in the fight against time,” Yao said. “We lose about 5 to 7 million (brain) neurons a minute in a stroke, so each minute that passes greatly affects what we can get back. The fact that we have two of these setups allows us to handle multiple cases at the same time as well.”

This is the first generation of imaging technology to use artificial intelligence to calculate and predict what size blood vessel stent is appropriate for a brain procedure, which oftentimes is removal of a clot.

“Anything that processes information and gives you a prediction could be considered AI,” Yao said. “Whether we accept what is shown or not is a different story.”

Having a clear image of the brain is critical, Yao said. “We’re often controlling a stent on a wire inserted through the groin or wrist. The common wire we use is 14-thousandths of an inch, the size of a couple of hairs. We have to get that end of the wire through a vessel that is often one millimeter or less in size. So, the better you can see, the better you’re going to be able to drive through that maze.”

For liver cancer, an extremely serious diagnosis, advances in interventional radiology are allowing the use of minimally invasive techniques that don’t require a hospital stay to replace surgery.

Now doctors are tracking early liver cancer development in patients with fatty liver disease, a condition closely tied to obesity and diabetes where excessive amounts of fat are deposited in the liver.

“Obesity and diabetes are what I like to call the other pandemic in the United States,” said Dr. Attef Mikhail, an interventional radiologist at St. Elizabeth Healthcare in Edgewood. “With fatty liver disease, the excessive amounts of fat cause liver damage over time.”

“So, there’s a large population of patients that are developing fatty liver and are at increased risk for primary liver cancer,” Mikhail said. “Most of these people who present are not candidates for surgery. They’re too old or sick, or their liver is damaged bad enough that they can’t have the cancer cut out, which would be the ideal case.”

Interventional radiology has developed a technique that is improving the survival of these patients. A small catheter is inserted into a groin or wrist artery and run up into the liver artery.

“These tumors have a blood supply and nutrition just like normal healthy organs,” Mikhail said. “The artery that is feeding the tumor is pinpointed and injected with microspheres loaded with doses of radiation. These are beads only five times the size of a red blood cell.”

“In large tumors, survival is improved, and in small tumors it’s potentially curative,” Mikhail said. “And the patient leaves with a Band-aid-sized incision.”

A 42-year-old father of three children under the age of 14 suffered from intractable pain that was not responding to extensive narcotics. The stomach cancer was beyond treatment so his problem now was pain control, and the oncologist turned to advanced radiology for a solution. An injection of Novocain targeted to the nerve center in his abdomen provided short-term relief.

“Once we knew his pain was tied to that nerve center, we went back in a few days later with a minimally invasive procedure and destroyed that nerve center with a specialized medicine,” Mikhail said. “He was able to come home the same day.”

The pain subsided to a tolerable level and allowed the patient to cut his narcotics in half.

“He was comfortable to the point where he and his wife were able to take a long-dreamed-of trip to Hawaii,” Mikhail said. “They sent me texts from Hawaii, and they were able to enjoy themselves because of this minimally invasive procedure. Of course, he died, but his quality of life was improved during the last months of his life.”

“Imaging and radiology are far ahead of treatment,” Mikhail said. “The real challenge is not in the detections, but in the treatment.”

Advanced screening technology is increasing earlier detection of breast cancers and decreasing the number of women asked to return for additional testing at University of Louisville Health–Mary & Elizabeth Hospital.

The mammography upgrade is part of a $1.5 million investment in breast health at UofL Health facilities.

“We are proud to now offer the latest technology and highest quality imaging to our mammography patients,” said Melissa Adkins, chief administrative officer at Mary & Elizabeth.

Genius mammography includes both 2D images and 3D tomosynthesis scans. In the tomosynthesis-dimensional portion of the exam, an X-ray arm sweeps in a slight arc over the breast, taking multiple images. A computer converts the images into a stack of thin layers, allowing the radiologist to review breast tissue one non-overlapping layer at a time. A Genius exam requires no additional compression and takes just a few seconds longer than a conventional 2D screening.

Genius 3D Mammography is also equipped with SmartCurve, which provides improved comfort without compromising image quality. The SmartCurve system features a proprietary surface that mirrors the shape of the patient to reduce pinching and allow better distribution of force over the entire breast.

“Improved comfort increases the likelihood patients will stay up to date on screenings,” said Dr. Brian Mattingly, director of breast care at UofL Health–James Graham Brown Cancer Center. “And the high-quality imagery provided through Genius 3D Mammography exams improves the ability to catch cancer early, which increases treatment options and the odds of beating it.”

UofL Hospital is at the forefront of nonsurgical therapies for prostate enlargement in men and uterine fibroid removal in women. These health procedures utilize the latest in interventional radiology techniques.

“Women who have discomfort and complications from fibroids can get a procedure called uterine artery embolization,” said Dr. Sohail Contractor, chief of radiology at the UofL School of Medicine.

Uterine artery embolization involves no surgery, no hysterectomy and the woman’s uterus is spared, Contractor said.

“We go through a small artery in the wrist or the groin with a catheter to the artery going into the uterus to deliver medication that shrinks the fibroids from within,” Contractor said. “It’s a same-day alternative procedure for women with fibroids.”

Tiny spheres delivered through the catheter block blood flow to the fibroid, which die off and are absorbed by the body. The spheres material is absorbed as well.

Men with age-associated prostate gland enlargement can suffer from urination difficulty and in some cases, infection, bladder stones and reduced kidney function.

“On the male side, the traditional treatment is to have the prostate gland removed, which could be unsettling surgery leading to side effects,” Contractor said. “In the new procedure, we go in through artery and get into the blood supply to the prostate and plug up arteries going there, causing the prostrate to shrink from within.”

UofL is looking ahead to the future for other emerging treatments.

How will AI help radiologists at UofL?

“We’re doing thousands of medical scans a day at the hospital. These algorithms are running in the background, looking at the scans and picking up various abnormalities like a brain bleed or a clot in the lung,” he said. “These tagged scans are bumped to the top of list so they can be identified when reviewed by a radiologist. It gives us an extra set of eyes.”

“Right now, this is only being used in two indications: for bone metastasis from prostate carcinoma and for neuroendocrine tumors,” Contractor said. “I have recruited a nuclear medicine doctor who will be joining us in January and who will hopefully be bringing this on.” 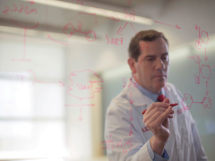 Turning the Corner on Cancer: Kentucky oncologists are encouraged by the impact of immunotherapies especially on lung cancer, a disease in which the state has the worst incidence rate in the nation. 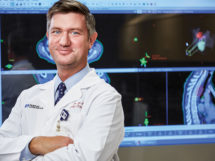 Taking on Lung Cancer in Kentucky: In a year brimming with bad news, there is some good news to report regarding lung cancer trends.