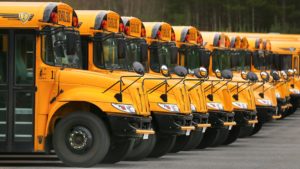 In 2016, the U.S. Justice Department settled claims against Volkswagen for using defeat devices in 2009-2016 Volkswagen diesel vehicles, which allowed the vehicles to emit up to 40 percent more nitrogen oxides than allowed under the Clean Air Act. Kentucky’s share of the settlement was $20.3 million awarded from the Volkswagen Environmental Mitigation Trust.

The Kentucky General Assembly authorized $8.5 million to reimburse local school districts for up to 50 percent of the cost to replace up to five school buses per district. Buses to be replaced were those in daily operation with the chassis year of 2001 or earlier.

The 2020 General Assembly developed a spending plan for the funds and approved expenditures beginning July 1, 2020. There is $393,000 remaining in the fund. Fiscal Year 2020 authorizing legislation provided that unexpended Restricted Funds appropriated shall become available for expenditure in the 2020-2022 biennium.

A complete list of the school districts that are replacing buses can be found here. Under the program, districts receive reimbursement once they show they have received the new bus and stopped using the old one.