By Lexington-Bluegrass Association of Realtors

LEXINGTON, Ky. — A cold stretch in the middle of February shook up the real estate market. Showings plunged during the middle of the month when a winter ice storm shut down Central Kentucky. For a two-week period, showings were less than the averages in both 2019 and 2020, and February ended with a 16% dip in foot traffic. By the end of the month, however, showings were back above the numbers seen over the previous two years.

Although traffic to properties declined, home sales managed to end with a 2% increase in February, jumping from 881 transactions last year to 901 in 2021, a new record for the month. Single-family homes increased 3% while townhouses/condos saw a decline of 10% for the month. 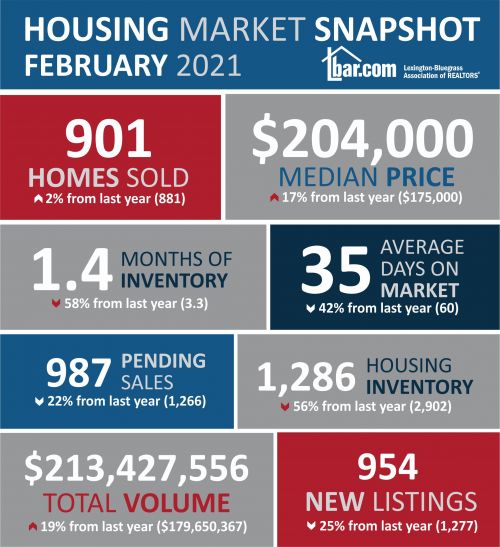 New construction sales bounced back after a slow start in January, ending the month up 8% over last February with 92 homes sold. This matched the monthly total in 2019 and was the highest sales total for the month since 2008 when 125 new homes were closed.

“The weather in February kept many people not only from getting out and touring properties, but also putting homes on the market,” said Kristy Gooch, president of the Lexington-Bluegrass Association of Realtors (LBAR). “New listings for the month also saw a drastic fall and with demand as high as it is, the market needs inventory to pick up going into the warmer months.”

With the lack of available properties for sale, the months of inventory also dropped to a new monthly low, reaching 1.4 months in February, a decrease of 58% from last year when that number was 3.3 months. For the entire 26-county jurisdiction, months of inventory for homes in categories between $120,000 and $250,000 were all under one month, with homes priced between $160,000 and $200,000 standing at just two weeks of available properties.

Days on market in February hit the fifth lowest on record by falling 42% over last year. With homes selling at 35 days, versus 60 in 2020, the total in February is a monthly low and follows the previous four months as being the only months with a faster pace of selling. Seven out of 10 home sales occurred in less than a month with only 5% taking longer than 120 days. Last February, only 52% sold in less than a month, while 16% took longer than four months.

“As the weather begins to warm and the spring selling season really kicks into gear, more and more buyers are going to be out shopping for properties,” stated Gooch. “Now would be a great time for those who need to sell, or are thinking about selling, to reach out to a professional to see what their home is worth. In many cases, the market has seen home equity rise so don’t leave money on the table. Sellers need to understand the market valuation if they choose to list.”

Total inventory in February dropped to a new record low, with 1,286 residential properties for sale, compared to last year’s 2,902, a decline of 56% over the course of a year. February was the 15th consecutive month of record low inventories with the month being the seventh-straight month of levels being under the 2,000 mark.

Pending sales declined for two months in a row, ending February with 987 transactions under contract, a 22% dip from last year when 1,266 homes were pending. The last time February pendings were under 1,000 was in 2015.

“It’s difficult to maintain the level of sales that we have experienced over the past several years when the number of homes available on the market is significantly below where it needs to be to satisfy buyer demand,” Gooch said. “It’s strictly a numbers game – closings can’t occur and properties that aren’t listed can’t be sold, therefore, pendings see a reduction. At the same time, this dynamic does affect housing prices as the region has seen double digit increases since the summer of 2020.”

Central Kentucky housing prices have continued to spike, exceeding the $200,000 threshold for the first time in a February and was the eighth consecutive month of double-digit increases. The $204,000 median price was 17% higher than last year when the median was $175,000, a record for the month. February’s median price was the fifth-highest ever on record, behind only the July through October stretch last year. Single-family homes increased 16% to $206,250 while townhouse/condo prices jumped 4% to $161,000.

Total dollar volume of home transactions jumped 19 percent in February to over $213 million for the month, compared to just over $179 million last year.