Kentucky’s seasonally adjusted preliminary February 2021 unemployment rate was 5.2%, according to the Kentucky Center for Statistics (KYSTATS).

The preliminary February 2021 jobless rate was down 0.1 percentage points from January 2021 and up 1% from the 4.2% recorded for the state one year ago. 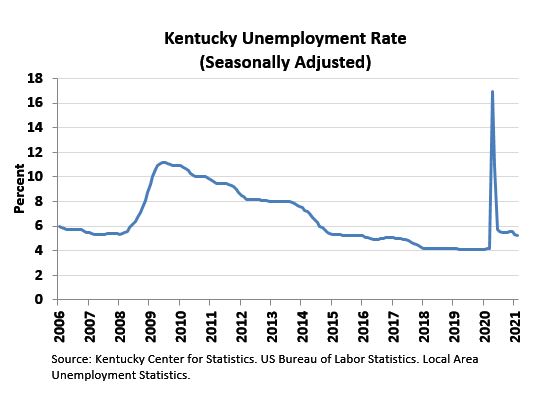 “The number of workers with jobs improved slightly in February, helping to push the state’s unemployment rate further down,” said University of Kentucky’s Center for Business and Economic Research (CBER) Director Mike Clark, Ph.D. “Over the past two months, both the number of people in the labor force and the number of people employed have improved. However, workers are finding jobs more quickly than they are returning to the labor force, which lowers Kentucky’s unemployment rate.”

“Payroll data from Kentucky’s employers pointed to a continued recovery in February that was driven primarily by hiring in-state educational services,” said Clark. “However, employment was mixed across the state’s other major sectors.”

Nonfarm data is provided by the Bureau of Labor Statistics’ Current Employment Statistics program. According to the survey, employment increased for four of Kentucky’s 11 major nonfarm North American Industry Classification System (NAICS) job sectors in February 2021, while five declined and two were unchanged.

Kentucky’s leisure and hospitality sector added 800 positions from January 2021 to February 2021, an increase of 0.5%. This sector was down 36,900 jobs or 18% compared to February 2020. The accommodations and food services subsector rose by 900 jobs in February while the arts, entertainment, and recreation subsector lost 100 positions. 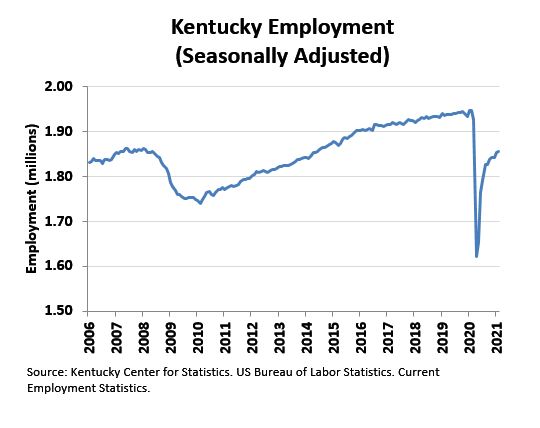 The professional and business services sector increased by 500 jobs or 0.2% in February 2021. The administrative and support and waste management subsector gained 300 positions, while the management of companies subsector lost 200 jobs. Employment in the professional, scientific, and technical services subsector was up 400 jobs. Employment in this sector was down 6,000 or 2.8% since February 2020.

Kentucky’s educational and health services sector was unchanged in February 2021. Employment in the educational services subsector dropped by 200 positions, but this loss was offset by an increase of 200 jobs in the health care and social assistance subsector. Since last February, the sector has decreased 15,300 positions or 5.3%.

Employment in the trade, transportation, and utilities sector was dropped by 1,200 from January 2021 to February 2021. Retail trade employment fell by 1,500 positions in February. The transportation, warehousing, and utilities subsector added 900 jobs while the wholesale trade subsector reported 600 fewer jobs in February. Since February 2020, employment in this sector has lost 2,400 positions or 0.6%.
Civilian labor force statistics include nonmilitary workers and unemployed Kentuckians who are actively seeking work. They do not include unemployed Kentuckians who have not looked for employment within the past four weeks.

From Kentucky Center for Statistics