Home » Goldstein elected to American Academy of Neurology Board of Directors 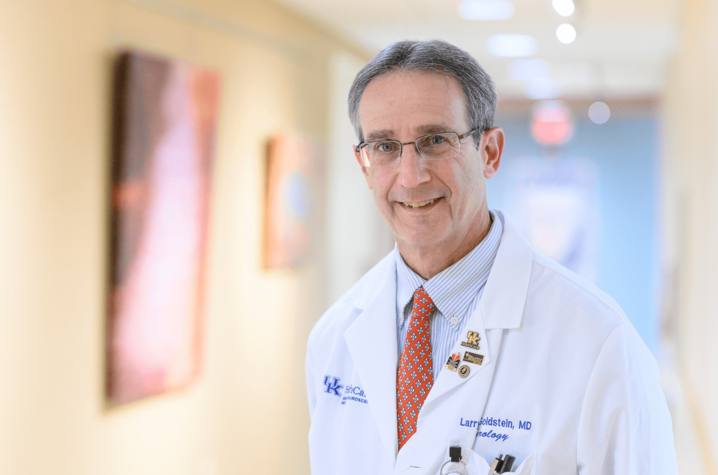 The American Academy of Neurology is the world’s largest association of neurologists and neuroscience professionals, with 36,000 members. The AAN is dedicated to promoting the highest quality patient-centered neurologic care. A neurologist is a doctor with specialized training in diagnosing, treating and managing disorders of the brain and nervous system such as Alzheimer’s disease, stroke, migraine, multiple sclerosis, concussion, Parkinson’s disease and epilepsy.

Goldstein received his bachelor’s degree in 1977 from Brandeis University and his medical degree from Mount Sinai School of Medicine in 1981. His subsequent professional training included an internship and neurology residency at Mount Sinai Medical Center, New York (1981-1985) and a research fellowship in cerebrovascular disease at Duke University (1985-1987). Goldstein advanced at Duke University to the rank of professor of neurology and director of the Duke Stroke Center prior to moving to the University of Kentucky in 2015.

He first became involved in the AAN as a medical student member as a way of meeting neurologists from across the country. Goldstein says as his career and experience developed, he found that working on committees was a great way of learning from passionate and engaged volunteers, while also being a way to support patients and the profession. Over the years, he has been a member of the AAN Quality Standards Subcommittee, the Practice Committee, the Stroke Systems Work Group, the Education Committee, the Joint Audit Committee (vice-chair), the Health Policy Subcommittee, the Neurology Chair’s Workgroup and as an AAN Media Expert with a focus on cerebrovascular disease. Additionally, Goldstein has served as a member of the Continuum editorial board and is a member of the Neurology editorial board.

“My experience in basic-translational, clinical and health services research combined with roles in leading professional guideline writing groups, governmental advocacy, health policy and now my perspectives leading a department and organizing a University-level research program combine to give me a unique skill set to advance the missions of the AAN,” said Goldstein.

Goldstein says he knows first-hand that the AAN is a wonderful resource for neurologists at every stage of their career and for addressing the needs of patients with neurological disorders. That coupled with seeing the medical profession as a whole, particularly neurologists, facing a daunting set of challenges is why he wanted to join the board of directors.

“One of my major motivations in becoming a department chair was to help build a program, advance the careers of both faculty and trainees, and address wider gaps and disparities in clinical care and care delivery. As a member of the BOD, I will have the opportunity to use my experience and perspectives to make a positive difference on a national if not international level.”

Goldstein’s two-year term on the board begins later this month.