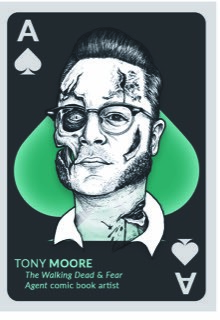 LOUISVILLE, Ky. – Kentucky to the World (KTW), a non-profit dedicated to telling a new story of Kentucky’s accomplishments on the world stage, has released its first deck of illustrated playing cards.

This is the first in a series that features illustrated portraits of extraordinary people whose Kentucky roots have fostered their success.

“We are excited to take the artistic renderings of these exceptional individuals and create a deck of playing cards,” says Shelly Zegart, president and CEO  of KTW. “Not only can they be used to play games, but also to educate students and enthusiasts about the artists, writers, thinkers, and game changers that are elevating the narrative of Kentucky throughout the world.”

Zegart added, “KTW inspires Kentuckians to realize their own potential through sharing stories that boost the value of our state’s positive impact across the country and around the world. Those featured on the cards are doing just that and making these stories happen one feat at a time.”

All proceeds from the sales of the playing cards support the ongoing work of Kentucky to the World.