LOUISVILLE, Ky.  – Buoyed by a local economy showing signs of recovery, as well as the promise of federal funding to push that recovery further, Mayor Greg Fischer on Thursday presented a bullish $986 million budget for the upcoming Fiscal Year 2022.

“Our city is regaining the momentum we had prior to the pandemic. We’re seeing a growing economy and a limited return of tourism and more in-person events. We’ve vaccinated about 330,000 Louisvillians, edging us closer to herd immunity against COVID-19,” he said.

And while the city needs to vaccinate about 150,000 more people to reach that goal, “I present a budget today that provides a roadmap out of 2020 and into the promising and exciting next stage of our city’s history.” And rightfully, he said, “that future won’t look like the past we left. We’ve learned important lessons that must inform the decisions we make moving forward.” 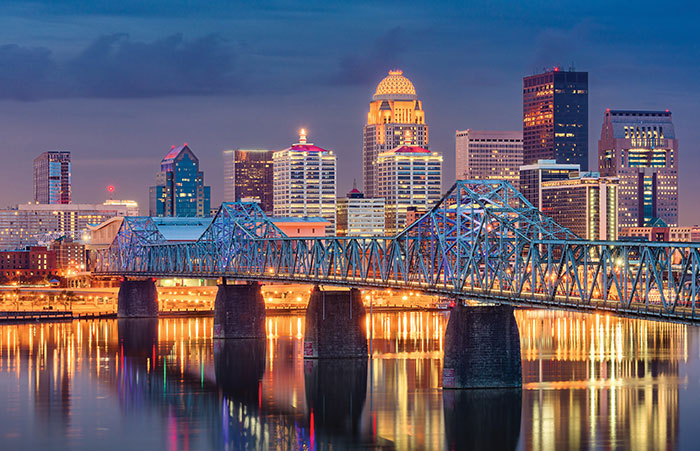 In his 11th annual budget address to Metro Council, the mayor focused on accelerating the city’s economic recovery with a greater focus on equity, reimagining public safety and expanding youth development efforts.

Creating economic opportunities for all

The mayor noted that “while we have no shortage of challenges,” the city’s financial picture is regaining the strength it had before the COVID-19 pandemic, partly because its core business sectors, including logistics and wellness and aging care, have continued to do well even during the downturn, and other industries have held steady or are starting to recover.

He also credited the federal government’s assistance, including $156.7 million in COVID-related federal aid that Metro Government has received since last year, mostly through the CARES Act. And he noted that the budget presented today was crafted with the knowledge that the city will receive more than $430 million through the American Rescue Plan, or ARP.

That funding is not part of the budget presented today, the Mayor said, because guidelines on eligible expenses by the U.S. Treasury Department will not be set until mid-May. But, he said, those funds represent a highly unique opportunity “to take ideas we once reserved for someday and turn them into reality now.” He announced the city is working with Accelerator for America to set up the Louisville Accelerator Team, which will convene conversations with business, non-profit, foundation, faith and other leaders “to ensure our priorities and our resources are aligned” in spending the one-time influx of federal funding.

Locally, the mayor said the city is seeing positive economic signs – including an uptick in tourism and investment, evidenced by an increase in downtown hotel occupancy, new non-stop routes from Muhammad Ali International Airport, opening of new hotels and solid bookings at the new Norton Healthcare Sports and Learning Center in Russell, and German manufacturing company Wieland’s recent opening of its North American headquarters here.

But to be successful, he said, the city’s core business clusters must thrive, “and we must (better) align our workforce skills with the digital economy. That includes more than doubling the city’s investment in the highly successful Code Louisville program, which has helped about 600 people find careers and earn family-supporting wages in the city’s growing tech industry.

Overall, the mayor said, “we know we have to do more to improve the economic prospects for our city and our residents,” which means addressing that “while talent and potential are spread evenly throughout our city, opportunity and access are not.”

That’s why the city launched Build Back Better, Together as its framework for creating an equitable recovery from the pandemic, he said, adding, “To realize our full potential as a city we must create an economic ecosystem that builds, supports and encourages Black and Brown businesses and business owners, workers and communities.”

That includes $250,000 for the new Equity in Procurement Task Force, which is working to close the community’s wealth gap by supporting Black-owned and Minority-, Women- and Disabled-owned Business Enterprises through supplier diversity initiatives, as well as investments in the Minority Business Incubator; and a new Louisville Forward staff position to focus specifically on business development in west Louisville.

The mayor highlighted visible examples of LMG’s work to help attract more than $1 billion of investment to west Louisville, including the Norton Healthcare Sports and Learning Center, the first phase of the new Beecher Terrace, set to open in June, and the Republic Bank Foundation YMCA and other changes at 18th and Broadway.

Public safety at a crossroads in Louisville and the nation

“Public safety in general and policing in particular are at a critical crossroads in Louisville and America,” Fischer said, noting that we must “think more broadly about how to create a safe city with fewer arrests and less incarceration for non-violent offenses.”

“This is work we approach with the urgency inspired by the racial justice protests we’ve seen in our city and around the country,” he said, before describing the investments in deflection and diversion, as well as increased funding for intervention, prevention, community mobilization, organizational change, and re-entry.

The budget includes $550,000 for the Group Violence Intervention initiative, launched late last year to divert people from the path of gun violence, incarceration and tragedy, as well as $500,000 for Reimage, a collaboration with KentuckianaWorks that’s helping to break the cycle of incarceration and recidivism by connecting justice-involved youth to education, training and careers in key fields such as IT, manufacturing, construction and more. More than 800 young people have enrolled in Reimage, and their recidivism rate is under ten percent.

This budget reflects the fact that producing safety requires a “whole of government” and “whole of city” approach – not just investments in law enforcement, the mayor said.

And “to ensure a better future for the next generations,” he said, the city must fulfill its responsibility to respond to the global climate emergency. Noting that today is Earth Day, Fischer cited investments in greenhouse gas reduction efforts, and $600,000 in environmental resiliency efforts to improve air quality.  He also announced the city is going to all LED street lights over the next five years as part of recently concluded negotiations with LG&E, and he is issuing an executive order to prioritize the purchase of electric and hybrid vehicles, green equipment and necessary infrastructure to support Metro’s transition to electric vehicles.

The budget also funds projects in Elliott Park and Chickasaw Park in partnership with the  Olmsted Park Conservancy, as well as tree-planting, park clean-ups, continued growth of the Louisville Loop, Waterfront Phase IV, and creation of the Shawnee Outdoor Learning Center.

In closing, Fischer said, “if the last year has taught us anything, it’s that while we can’t predict the future, we must prepare. We must plan and adapt while we cultivate in our community the timeless qualities that will help guide our future: resilience, innovation, equity and compassion.”