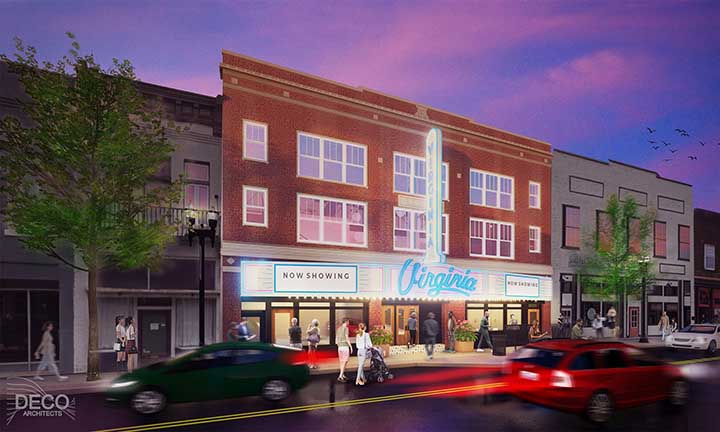 The Virginia will be completely renovated and converted into a live performance venue. Somerset firm DECO Architects developed renderings for the building and bidding on the project will begin immediately. The city will own and maintain the facility, which will feature live music and theater and be available for rent as a community event space.

Mayor Alan Keck said he anticipates the facility will open in 2022, just in time for the 100th anniversary of the building.

“For all of my adult life, I’ve listened to Somerset residents discuss revitalizing downtown and specifically restoring and reopening the Virginia Theatre,” Keck said. “I’m grateful to everyone who has kept this dream alive by fundraising, volunteering or simply promoting the idea that someday this could be accomplished. With tonight’s announcement, history is not only being honored, it’s being made. I’m excited to join residents and visitors at an event in the fully renovated Virginia next year.”

Built in 1922, the ailing Virginia — once an integral part of the downtown landscape, serving as a theater and later a movie cinema — has been vacant for more than 25 years. Numerous attempts have been made to raise funds to revive the building, the latest efforts focused on replacing the roof and removing hazardous materials, theater seats and the cinema’s old balcony.

Downtown Somerset Development Corporation’s board of directors voted in September to deed the building, which the organization had owned since 2003, to the city for $1. The agreement between the two entities restrict The Virginia’s use to arts, entertainment and historical purposes and stipulates that if the building is not complete or functional by the end of 2022, it could revert back to DSDC at that time.

Keck said the city will enter into a partnership with a production company to book live music events, with a request for proposals to be issued soon to begin that search. The Virginia will also host performances from Flashback Theater, Somerset’s local production company, and be available to rent for weddings and other private events.

“In my view, one thing that has been consistently missing from the conversation is a plan to ensure the Virginia doesn’t turn into a money pit,” Keck said. “We must have sustainable sources of revenue through events and performances to make this a successful venture. I’m now convinced we have a working financial solution by focusing on the robust market for live music.”

The bonds approved Monday also refinance $7 million in existing projects (a fire truck, the purchase and demolition of Cundiff Square, a Kentucky Rural Water Fund loan and a Citizens Bank loan for Mid-Town Sewer), a savings to city taxpayers of more than $800,000. The city will use an additional $4 million for new projects, including a state-manded dewatering system at the wastewater treatment plant. The project was mandated in 2018 and should have been addressed by the previous administration, Keck said, but now can be executed with a funding package in place. Sewer line extensions for industries and new wastewater pump stations are also part of this initiative.

“With interest rates at historic lows, this is the best chance we will ever have to honor and restore the Virginia to its past glory and create a venue of which we can all be proud,” Keck said. “That we can couple reviving this building with an initiative to save taxpayers more than $800,000 through refinancing, while also executing several important infrastructure projects is a huge step forward for our community.”

The vote to approve was 9-0, with council members Jimmy Eastham, Jerry Girdler and Robin Daughetee absent.