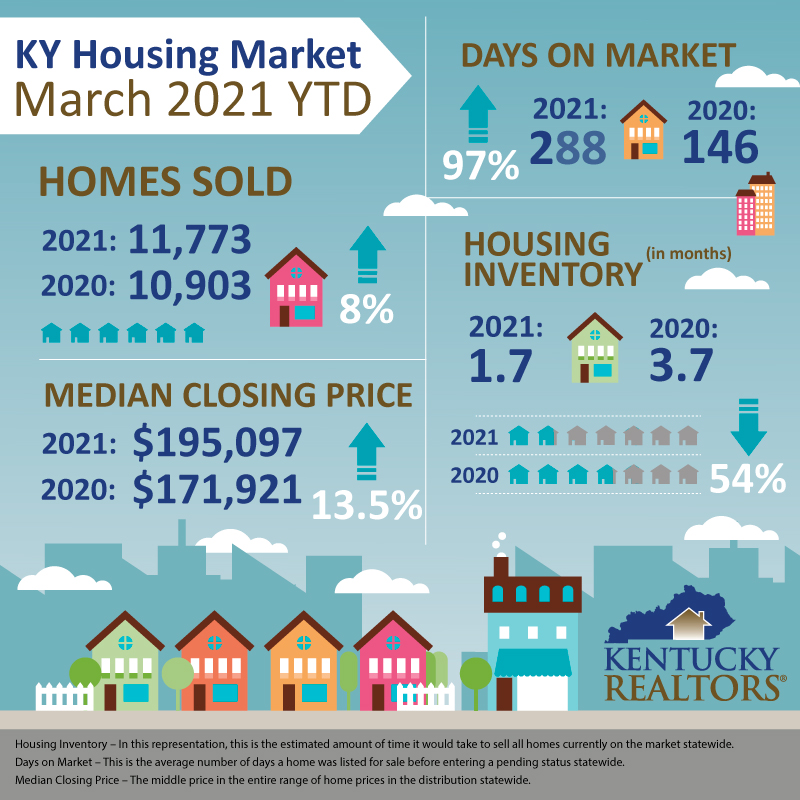 LEXINGTON, Ky. – The year-over-year sales number increase marathon continues. The only factor currently lurking that might threaten continued growth is the lack of homes hitting the market. The month of March saw 4,711 closings in Kentucky, up over nine percent from one year ago (4,306).

Existing-home sales fell in March, marking two consecutive months of declines, according to the National Association of Realtors. The month of March saw record-high home prices and gains. Total existing-home sales, completed transactions that include single-family homes, townhomes, condominiums, and co-ops, decreased 3.7% from February to a seasonally adjusted annual rate of 6.01 million in March. Sales overall climbed year-over-year, up 12.3% from a year ago (5.35 million in March 2020).

“Consumers are facing much higher home prices, rising mortgage rates, and falling affordability, however, buyers are still actively in the market,” said Lawrence Yun, NAR’s chief economist. “The sales for March would have been measurably higher, had there been more inventory. Days-on-market are swift, multiple offers are prevalent, and buyer confidence is rising.”

Pending sales are up 21% over last March indicating a strong spring selling season. “Inventory remains the key factor in how the market will perform into the summer”, said Charles Hinckley, president of Kentucky Realtors. “We’re hopeful that an influx of new sellers, as well as some new home construction, will give Kentuckians more homes to choose from as they relocate.”

Just 13 homes sold as distressed in February, matching the figure from March. This number continues to hover at record-low levels due to the various recourse offered to homeowners behind on payments due to the pandemic.