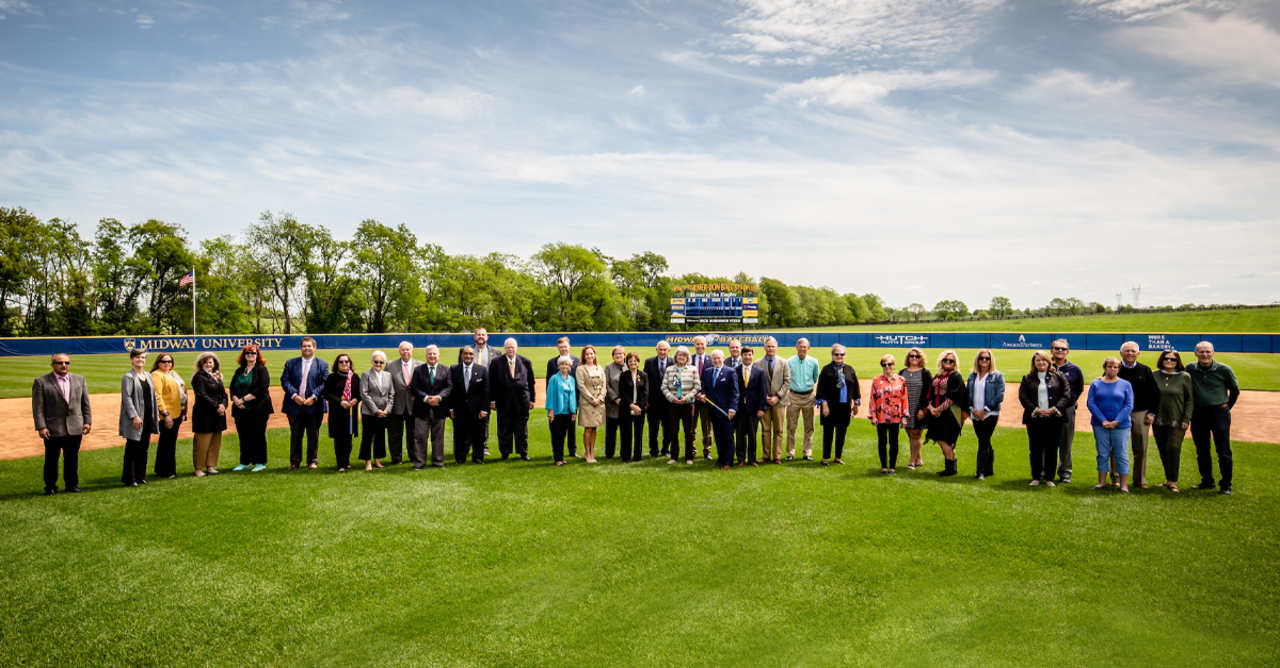 MIDWAY, Ky. – At an on-campus ceremony yesterday, Midway University officially dedicated the Tracy Farmer-Don Ball Stadium and Dick Robinson Field, the new home for the Midway Baseball Team. Midway resident and entrepreneur, Tracy Farmer, along with Mira and the late Don Ball, cofounders of Ball Homes, jointly provided a gift to the university for the naming rights of the new ballpark. Mira Ball is a Life Trustee at Midway University and has served on the board of the University for 31 years. Tracy Farmer is a previous university trustee.

In addition to the park naming rights, an additional fundraising effort was dedicated for the naming rights of the baseball field in honor of the late Dick Robinson, who passed away in 2011. A longtime Georgetown resident, Dr. Robinson, who was a prominent civic and business leader, helped establish Midway University’s Sport Management program. Dr. Robinson also was a fixture in Central Kentucky sports, most notably for creating and managing until his death “The Joe B. (Hall) and Denny (Crum)” radio show, which ran from 2004 to 2014.

“Midway University is pleased to honor all of these community leaders who not only have made significant contributions to our historic university but to Kentucky as a whole,” said Midway President, Dr. John P. Marsden. “Their gifts, along with several other generous donors who helped the University build its first-ever baseball park, have positively impacted our institution and helped in various ways over many years.”

The baseball stadium fundraising was part of the larger Campaign of Opportunities, which was launched in response to the rapid growth the University experienced after going co-ed in 2016 and expanding athletics. The main goals of the campaign were to raise funds to make improvements to some existing facilities and construct new facilities. The campaign also funded the construction of the new Hunter Field House and major renovations of Pinkerton Hall and Marrs Hall, as well as updates to Belle Wisdom Hall. All projects were completed without incurring any new debt.

The Midway Baseball Team played a couple of games on the field in spring 2020 before the COVID-19 pandemic ended their season. The team resumed practice this past fall and has hosted several home games already and looks forward to the time when larger home crowds can gather to cheer on the team.

To find out more about Midway Baseball go to www.gomidwayeagles.com.

EKU returns to in-person commencement
Bottom Line: Gov. Beshear announces business capacity to increase to 75% and changes to mask mandate for those who have been vaccinated